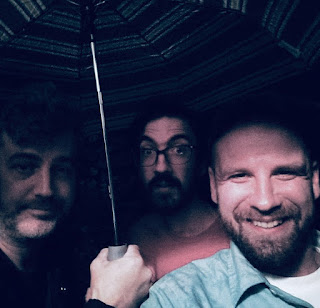 This isn't the first time that singer/songwriter Jim Cherewick has been part of a certain music project that sneaks out new material toward the end of a calendar year... He's done it before with a post-punk group known as Congress. Beautiful stuff comes from this raspy voiced warbler...And this time, he's hooked up with songwriter Joel Parkilla of an Ann Arbor based band, Human Skull..., another comparatively low key group that forgoes flashy social media presence and instead just rolls up to spots like Ziggy's, the 3rd Death Star, or the Trumbullplex, and lays down some gnarly strain of aerodynamic indie-rock. My ears are always peeled for whatever these two are going to do next, and they're true to form by just sort of setting this terrific and tender 8-song album out on the endtable of the Internet and shuffling away before I can tackle them with appreciation. It's False Figures.

There's something about both of their voices to where I can't put my admiration into words without sounding off-putting... But there is an undeniably poignant frogginess to their high, creaky, but ever tuneful voices... These might be registers and intonations that the rest of us would only reach amid guttural stretches in the foggy mornings upon waking...I love the almost-diffident quaver and creak of these voices, punk-loving folk balladeers at the indie-rock honky tonk!

There is a feeling in each of their voices that won't be put into words on this blog, but it's something we've all felt...in times of bliss and dread, in times of hectic weariness and head-over-heels love. If I write about only one new album this year, it's gotta be False Figures, with Jason Lymangrover (of Hydropark) providing bass and guitar, and Cherewick/Parkilla swapping lead lyric-writing, and even covering 1 of each other's tunes.
Posted by jeff milo at 6:30 AM