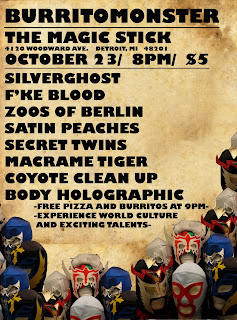 Deleano asks me if I know anyone willing to dress up like a giant Burrito...

...Anyone?...Someone daring enough to envelop their body in a terrible and tubular tortilla, ....with meat, cheese, beans, lettuce, and all other fix-ins - to personify the makeshift mascot for a night at the Magic Stick - 10/23 - which is spearheaded (and double-headlined) by two bands featuring the jet black slick haired percussionist...

Silverghost and F'ke Blood were offered a gig at the Magic Stick, a night to fill, and assured catered edibles in the form of pizza for attendants. Well, Marcie (Deleano's compatriot in the electro-rock duo Silverghost) looked at each other and shrugged... "Why not have burrito's too?"
Why not get theatrical and make it some sort of wacky Hammer Horror film-trip gone south o' the border - - BURRITO MONSTER