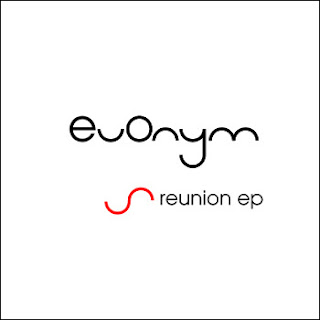 Blogs love to name things. To classify them.
This Ypsi-based quintet is named for a noun that means an apt name-for a person or place, something that seems to fit.
And here, with Euonym, I can't quite give you a name.
I can give you elements...the senses...
a brooding, brushing mystery, stoked by a stirring acoustic guitar and a stirring low boom vocal that winds upwards into a bristling electric guitar that accelerates alongside the clattering drums while a synthesizer flutters this way and that like uneasy avian surveyors darting across the shunting song...
...and that would be "Decibel 1903..."
While it's tempting to embrace the gut reaction for naming: indie-rock... be it Barlow or Brock... one would also throw in Byrne... you could throw around as many names, be they songwriters or be they nonsensical mish-mash catch phrases often utilized by the shoot from the hip style of blogs -
But Euonym can be as raucous as they can be meditative - as fuzzified "indie" as they can be ambient electronic - The landscapes are often wavy, jittery even, warmed by strange spacey tones of synthesizer and flitting pianos, the vocals are a pensive, autumanl-tinged musing and the guitars vascillate from delicate to deluge. It's a dark-ish, rough-ish, taut sound that often gleams a coaxing pop sound underneath a sort of spooky-folk vibe, rusted or roiled by the tinge of a spilling feedback or made luminescent by it's electronic accoutrment.
What's in a name?
Facebook
Bandcamp
Look for a physical EP later this month
Posted by jeff milo at 5:05 AM