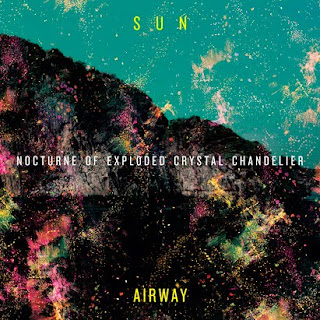 Night Owl's Delight - I should probably give you more credit and admit that an album title such as this probably gives it away, that this is a dandy night album.

Sun Airway find that mystic clearing between the forests of shoegaze and dream-pop, where they galvanize and embody that sort of magical time of night where one feels as though they could fray, fuzz and fragment away into a lulling, trancey daze - some sort of half-exhausted natural high, just past midnight when sleep is surrendered and we pause at otherwise disregarded marvels like gaping ambience of faded-glow star sheets above...

Heh. Rather - it's a very evocative, smooth waving sound, drenched in ethereal electronics. Where this Philly duo (and touring quartet) could set themselves apart is the distinctively indie-rock sound of it's production; the vocals, inevitably recalling the sort of mumbly urban poet drawl (of a Reed or the more recent cribbings of a Casablancas), are, with some exceptions, often up front and clear(ish), avoiding the over-drenching of vocoder or echo - a nice balance; while the more ambient sawing drones of the synthesizers may wail in a dizzying atonal storm, they never incur the noise-ish rath of feedback indulgence or a too-heavily spread reverb layer.

It's swaying hooks, easy going/driving beats and subdued, drifting melodies sever it from the murky n' mystic pools of druggy dream pop (even though its effervescent electronics and bedroom-dancing facillitating beats may bear certain resemblances), the heart of their sound and song crafting, instead, seem to be lean closer to the melody devotee movement of the upper end of our most recent decade - which is where early comparisons, only somewhat justified, to Animal Collective come in... But one could take A Sunny Day In Glasgow and wipe away that sounds sometimes foggy reverb and disorienting echo-loop - and combine that with Delorean but tone down some of the more sugary or bombastically dance-pop pulsing beats - and just find a nice middle ground... a clearing in the dreamy electro woods.

And this is, indeed, an album for the night. These layered churning sounds of synthetic crickets and droney shushing of digitized tree branches swaying evoke an airy detachment towards "Infinity"...and being "Swallowed By The Night.... wish(ing) to be swallowed by the moon...just a couple astronauts who won't be coming home soon..."

A refreshing kind of escapist pop. Where we escape into the night. When all the lights start to turn off and all the humans go to bed - that, that is the time when the electronic music always seems most appropriate, melodious machines turn on and replace the noisy mechanized bluster of cars and fluroescents and air conditioners.

Turn on your synthesizers, "Put The Days Away!"