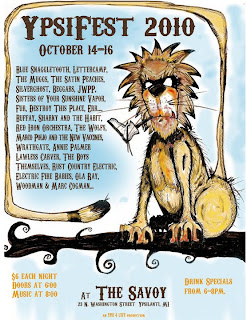 YpsiFest goes back to 2003 – when Anthony Anonymous (of Jehovah’s Witness Protection Program) aimed to stir up a “two day music blowout…(or) ‘fest’ for lack of a better word, that focused on bringing Ypsilanti bands together with some of the best bands in the Detroit-and surrounding-areas.”

Anonymous, one of just two shaggy beardy shredders comprising JWPP (with Jehan Dough) was, back in 2003, playing with Rome For A Day. The inaugural featured bands like Thunderbirds Are Now, Few and Far Between, and Charlevoix. “It was a celebration of Ypsi!”

Now, some of you might know Ypsi as that grayish trading post type town, an strewn with old (or closed up) auto plants and a lackluster skyline besieged by a blushingly phallic water tower. ’s eastern, less hippy-ish little brother and once-home of teenage Iggy Pop.

Come… discover… how much more there is to celebrate – through three consecutive music mashed trounces through the still new-car-smelling elegance of the !

2006’s show was the actual birthplace of Anonymous’ current band, JWPP. The last two years (08-09) there were no such Fests for Ypsi. Anonymous noted his appreciation for Leighton Mann (of Chapstick)’s assistance through the Elbow Room years. This year, Andy Garris (of the ) was “in immediately” when approached with Anonymous’ proposition to resurrect it.

So this is it-

A commendably flavorful line up

Punk – from all angels

It’ll be interesting and weird and fun and celebratory.

Red Iron Orchestra wowed at their Dally performance. Err…should be quite interesting. Beggars and Blue Snaggletooth and Electric Fire Babies are pure energy.

YpsiFest - tomorrow - Check it out - the JWPP are pure heart and a wellspring of camaraderie for this state's music community.

Ypsi is awesome! Come check it out!