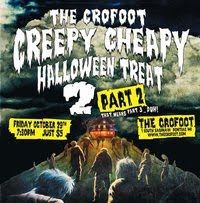 The incidence of bands "dressing up for Halloween" as other bands...(from Strokes to MC5 to Yeah Yeah Yeah's to Weezer)... went from whimsical larks of inner-dork indulgence to a solidified tradition, (endemic even) in just three years time.

With such a fertile music scene here in Detroit, the "concerts" themselves blur into invigorating costume parites for musicians, with parades of bloated bills showcasing 6, 10, 15!! bands in one night. Understandably, local performers bottle-neck their way in and onto these seasonal spooktacular line ups simply because it's so much fun. Not only the opportunity to dress up, to perform for your local music scene on such a characteristically freak-exploding night, but to also enter the minds, bodies, and choruses of some of your favorite bands from days gone by. 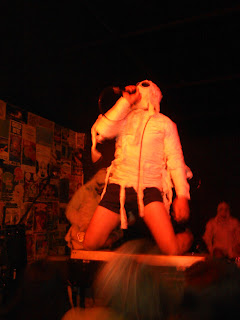 And yes, nostalgia plays heavily into it... but nostalgia inevitably plays into any of our 20/30-something office day job-fried minds who continue to get a renewed thrill this time of year for Halloween-angled goings-ons.

Because, face it, you air-guitared to "Say It Ain't So" by Weezer... and you know all the words to "Boys Don't Cry" by the Cure and would revel at the chance to belt it out... and, wouldn't it be weird and cool at the same time to hear a local band cover "Tonight Tonight" by the Smashing Pumpkins?

In any case - nostalgia aside - I have to incant: The last two Crofoot Halloween extravaganzas provided me with a handful of performances that I still regale, to this day, some of the best I've seen in years...

1. Bars of Gold as Talking Heads... just a staggering performance, start to finish, whilst also putting their own characteristic touches upon these tunes. We all tripped out on some "Stop Making Sense" transcendence.

2. Child Bite as Nirvana... people lost their shit... Because, realize: A.) We had a crowd that'd been downing High Life's for four hours - B.) with many of them at-or-under 25 years of age and thus having never "seen" Nirvana live and thus are quite influential to see this experience through drunk-goggle-hallucination and suspend their belief for it to be the genuine article... and C.) these raucous rockers get up in costume (with blonde wigs) and rock through some mosh-friendly Incesticide material. (no video survived).

Ever see a band cover Outkast for an entire set? Did you miss Pixies on their reunion tour? Wanna see along to "Peaches" by Presidents of the United States of America?