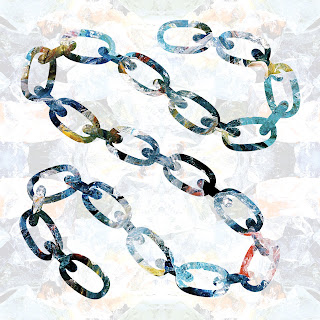 Do enough reading up on this band and you'll find recurring buzz words like: 'melancholy' or 'nostalgic'... or 'dark...'

And... yeah, sure one of their best songs talks about rising up (again) like a ghost (Listen: "Photojournalist") still ...on it's surface it's still that fuzzified sparkling chill-wave groove that, in blogger-world, has already been melodramatically moaned as some played-out vexation. But, really, it is, for the moment, (repeat, for the moment,) not going anywhere - so we should just take each new Neon Indian-y/Toro Y Moi-y styled buzz crackled tilt-o-whirl pop project at face value.
Which, by doing so, would vindicate a band like Small Black...

This Brooklyn based quartet could risk falling in with the rest of those day-glo electro-pop darlings of the bedroom-composer-heralding blogs, but, as a fleshed out live band with drum n' bass sutured into their synth storms and accentuated by echoy-loops and fuzzed out vocals, they seem to reach a bit further back than their contemporaries, father back than a mere reconstructed and recallibrated ebullient 80's dance pop.

There's is more towards the murkier, proto-electro-pop sound; perhaps, a Low-era David Bowie (take the weird, nauseating intro of "Photojournalist"). Or, even better, if you want to loop 'em in with anyone - toss them closer to Future Islands' lot (the shimmying beat and shining guitars of "Search Party" - (listen) )capture a sound that makes them seem like potential distant cousins). But still, other songs will just feel too "drenched" by a Washed Out-type sound ("Goons") or maddeningly toe-the-line between distinctive and derivative ("New Chain)."

It's a "bedroom" composition that deserves more than a glance - explore it, look under it's bed, in the closet, on the shelves and out the window. How soft is the pillow? What kinds of posters are on its walls?