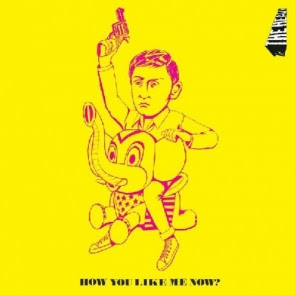 When your sonic stage is only as big as an EP will allow, you better hit the ground running, better not let any listener catch their breath, and better keep all those fiery elements, particularly drums, bass and brass, -blaring for all of your 19 precious minutes.

The Heavy deliver, again, as they'd done already with last year's The House That Dirt Built.
But, it's probably nothing that new for already-established-fans of the English neo soul rock group: - booming and arresting beats that bridge hip/hop to garage grit; gleaming guitar chords conjuring some Stax recalling funk flare under these high range groanin/croonin vocals oozing attitude that bridges James Brown's breathless belting to a more playful/fantastical Screamin' Jay Hawknis trip.
This EP effectively trims the fat of the 09 LP, redelivering their brass bolstered, strutting dance hit, "How You Like Me Now?," featuring the dapper-as-ever Dap Kings (the funk collective that backs Sharon Jones and also provided the music for Amy Winehouse's breakthrough record). This EP is pretty much a sustained explosion of booming beats, stylish bass grooves and rousing brass attacks (but "Strong Enough"'s sort of bluesy grind slows things down a bit, breaks it down for an attempted hand-clap-along ballad type thing to mixed results).
The song this EP''s named for has spread like wildfire, featured everywhere from car commercials, to sports arenas to the MTV Movie Awards.
But check out "That Kind of Man" for a taste of what the EP has to offer, beyond just being a bit of a 2nd-helping for a world newly enamored with this group's sound.
How You Like Me Now EP is like Dirt Built's encore - feed them with more funk while the band finishes their current tour and gets back down to buisness of another LP.
News: The Heavy
+the band's site
+Counter Records
Posted by jeff milo at 7:54 AM