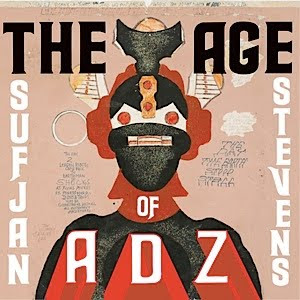 Music journalism has many arguably inane alleyways issued out from it's soon forgotten pages - how profound can a "concert review" be to the readers who weren't there ? - how does one craft a compelling story around what otherwise seems to be the same old 4 dudes out of their garage origin ?


And, why bother writing about a show that's already sold out?


Well, that's to be expected when it's one of Michigan's favorite sons.... at least the son that dabbles in quirked out baroque-bolstering austere-ish, splendorous poetic folk pop. Sufjan Stevens.

His latest releases, first an 8-song EP (the staggering orchestral wobbly willow of the All Delighted People EP - "a dramatic homage to the Apocalypse, existential ennui, and Paul Simon's "Sounds of Silence"") + and a full-length LP (the echoey beat-laden, electric fuzz spilled waft of the Age of Adz LP), stirred a considerable tilt of the head, cock of an eye brow, scratch of the head, from those who'd come to associate the songwriter with some sort of post-apocalyptic internet-scorched Folk reimagining.

Read the review from Paste where Stevens details the effect of last year's BQE project for the Brooklyn Academy of Music upon his perception of a song and his approach to writing.
Age of Adz is an interesting listen. I dread the day anyone tries to make a dance-mix out of "I Walked." "Futile Devices" hits such sad tones with those pianos and his lyrics emmulate a wound (a bit mopey, defeatist, heartbroken stuff), but, on a deeper level, it seems his self-questioning (as a writer, or...perhpas, self-deprication) comes through: "It's hard, so I won't say it at all.... / I think of you as my brother...although that sounds dumb."
But, instrumentally, this is not anything like the Illinoise record, where you could play some tracks for your mother, and far from the breath-stealing tragic portraits of the acoustic/piano-led Michigan record - (see: dizzying gurgle and glitch (over strings) with "Too Much")
This was a healthy jolt, in the end. Stevens' sound, particularly the coalescing perception, style and shared sounds of the Michigan-Illinoise records, had made his name into some sort of quick and dirty descriptor to sum up the followers of the considerably unique neo-folk trail he blazed.