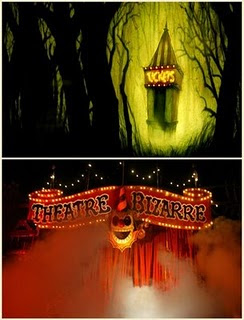 Theatre Bizarre's renowned carnival-style Halloween celebration will "most likely" proceed this week after being shut down by failed inspections.

The latest Detroit Free Press report says the multi-stage concert/variety show/freakshow wonderland will instead be hosted at the Fillmore Detroit. Ticketholders planning on attending the mandatory-costume outdoor concert were asked to stay tuned to Theatre Bizarre's Facebook for further updates, as The Detroit Fire Department and the city's Buildings, Safety Engineering and Environmental Department weren't budging on allowing the event to proceed tonight, as previously scheduled.

This haunted house meets backyard bonfire as presented as a serial killer's escapist fantasy world through installation art and performance art, has been a renowned Halloween institution for 10 years, on West State Fair. The downfall, said organizer Ken Poirier, was due it's elaborate (and largely-attended) event being hosted in a residential area, coupled on top of the hazy area of serving alcohol (with disputes going back and forth as to whether they are "selling" it or "giving (it) away."

While this morning's Free Press used the word "likely," the Detroit News reported that the event "is moving" to the Fillmore.

Best to check Theatre Bizarre's Facebook regularly, especially if you're a ticket holder, as the passes are "non-refundable regardless of circumstance."