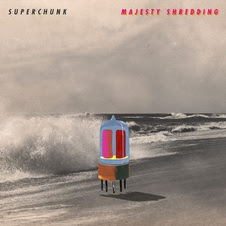 NHPR.org - Superchunk's Mac McCaughan Plays Not My Job
Mac McCaughan: the front man of seminal underground pop/rock collective Superchunk, the poignant and pleasing indie spectacle of Portastic, and co-founder of the commendable Merge Records (who gave the world it's recently blown-up and somewhat deflated indie deity Arcade Fire, as well as the almost teflon-like credibility-clinging institutions like Spoon or fellow indie auteur/aristocrats like Lou Barlow) -
He's probably got a lot of stories to tell - including back to the days when his flagship band was just called "Chunk," how "we've come close to dropping ourselves" from his own record label and about meeting Beyonce after covering a Destiny's Child song...
Thus, he shares it with the charming cognoscenti on the panel for NPR's Wait Wait Don't Tell Me (this week) -listen above - where he answers questions about Kenny G.
In the meanwhile - Superchunk has been reinvigorated, welcomingly, for their latest release - Majesty Shredding. (A name that just begs me to play upon it, as it's a soothing re-conjuring of that shred-heavy semblance tied to those early 90's days). Rather than me ramble about it - how about you just listen to the interview - and check the reviews...
Here, from The Guardian - echoing my own assessment of it's flat out enjoy-ability...
or The Skinny - which drops the R-word... "retro."