Part of me wants to say that the High Strung have made a genre-splicing(/genre-mutating) musical soundtrack to a coming-of-age-type road-trip/adventure film (think The Warriors set to Yellow Submarine with swords, mead, magic and all tumbling cross Michigan-feeling freeways) where our journeying crew of heroes share sobering life-lessons and spur each other on with renewed resolve and strengthened bonds in a valiant dragon-slaying manner that aspires to indestructible enthusiasm in various facets of life.

I want to say that. 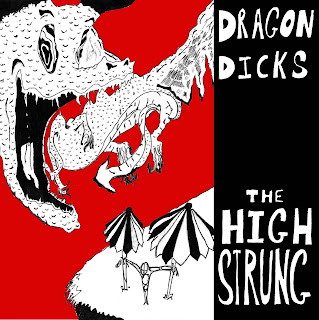 But you’ll want the meat of the music, so here goes: it shifts from lo-fi, fuzz-hued, minimalist affairs led by a guitar (an acoustic jangle or a pedal-gurgled grr) or piano (a sonorous buoyant chime or a more chilly synth-organ) then into full-band vigorous marches and drivers, muscled by that playful bass groove and tight tumbling drums. “I Want Us All To Relax” feels peppy, pulsed with a shuffling beat and a bass that links with the high-steps of the piano’s parade; “Blast It” flexes their knack for atmosphere (yet so sparse, the marching drum fill and punchy bass ricochet under clanging guitar strums) as the song builds into what may feel the most traditional High-Strung-ish entry in its taut, scruffy power-pop flavor. But after that, it’s down darker roads like “Decomposer” feels chillier only by the bending tones hit on this slightly nervewracking slide up the guitar neck while ominous Gregorian Monk-like voices ahh-ee-ooo around in the background.

The message, however, is represented by both of these tracks – we’re in it together, till the end, and nothing’s gonna get in our way, in fact, we demand our dreams be left alone – and if anything does get in our path, we’re gonna take it out. Bout time a band made a concept album like this – setting the music life/band life experience as an struggle and an adventure, to be survived, mastered and won, together!

Whereas I mentioned “traditional High Strung” –at least compared to their first three albums – all very lively and whirling – but Dragon Dicks will act as the gravel-speckled, unkempt warrior to the more glossy, debonair mystic that was its 2009 predecessor, the highly produced Ode to the Inverse of the Dude – that said, while it’s opener is a low-key organ-hummed jaunt and “Black Mad Wheel” is a fuzz-blown, hand-clap led glam-rock groover and there are other strident noise-pop clangs here and there, the “grit” and “lo-fi” feel is often distinct only by comparison to Ode’s atmospheric glitz – “Back To The Wishing Well” is anthemic with a stair-leaping up-and-down hook that has all elements firing—shambling surfy guitars, melodious bass and hammering drums.

Overall, it’s a slightly more blemish-baring, lo-fi-rocker – certainly having it’s Sgt-Peppered-penchants (the circusy imagery and fast-rolled barker-esque regaling vocals of “Levitate”) it’s inevitable Guided By Voices guttural feel (“Barn Party”’s fuzz-fried vocals and urgent clattering propulsions are spiced nicely with weird UFO-ish howls at the corners). But most of all, the suggested theme, of communal-unity not only to overcome the adversity of life’s great adventures, but also to reassure ourselves in nuanced instances thus to obliterate self-doubt…it obliterates group-doubt, “In Dragonland we practiced every day, we wouldn’t go away, it was hard, but we did it.”

This is good jeff. I think it's good