Facebook is steadily getting creepy. ...just quick thought, gang, -before I get into the usual shambolic screed of "upcoming Detroit shows" characteristic to DC - here's a germane column you constant updaters should read (from Newsweek; and then, another Newsweek post...; and then, just for delicious irony--and in case you want more info--Newsweek's facebook page.).
That said - when I was going through all of my facebook-invites this week - two particular "events" on-or-near Memorial Day caught my eye based upon the girth of their line-ups and thus anticipated likelihood for healthy draws (and I'll point them both out in "parts 2" and "3" to follow).
But, for this more humble and endearing "part 1" - I'd like to try and persuade you with a few less-beaten tracks, when it comes to some bands performing this weekend. 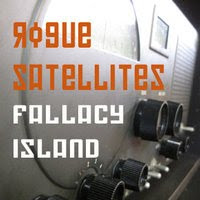 All Facebook funning aside - can I, if you have the time, subsequently direct you to some (hold the snickering) myspace pages...to then sample some songs of blue collar underground indie-art/rock types like The Rogue Satellites (who are releasing a CD titled "Fallacy Island" - Friday at the Lager House, with), Pewter Cub and Fur (supplementing the party).

~
Now...who here likes Godspeed You Black Emperor! -? It takes two of my hands to count off some of the local psyche-rock bands here in Detroit who've admitted them to be an influence. So, then, you're probably familiar with Thee Silver Mt. Zion (pictured below), the comparatively epic-scoped-composition gaping collective led by Efrim Menuck, a guitarist from the initially referenced Montreal-based group. Mt. Zion's aim is similarly stratospheric and cerebrally-stretching pounding post-rock stuff.

So, then - why not check them out when they come to town (Friday, at the Crofoot in Pontiac) - as they will be welcomed by one of my (er, DC's) new favorites, the transcendent starry-fogged effervescence of Jura (who...if you keep your ears bent and eyes peeled, have a full-length on the way.