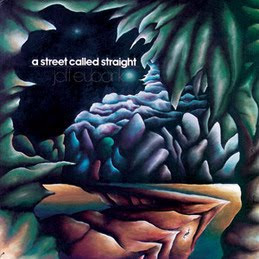 Just as it did with "lost" Detroit garage rock trio Death and their mid-70's release For The Whole World To See...Drag City has, again, unearthed a buried gem - this one is an ornate, flute-fluttered, soft-rock-jazzy sauntering from Kansas City-set singer/songwriter Jeff Eubank.
And, this 1983-re-issue will come highly recommended for when you're in the mood for a slightly-psychedelic swished champer-pop elegance - for Eubank's vision is that of a sepia-soaked polaroid snap of late 70's suburbia with weird-ish middle class lanky quasi-rockers shuffling Mott The Hoople and Big Star in the tapedecks of their beige-trimmed camaros but transmogrified into a more other-planetary-fused surreal-quality.
Plaintive acoustic guitars chime and jangle over shushing, shimmying flutes and steady stepping beats while Eubank's sweet voice combines the warm-blanketing soothe of Simon, Taylor, Fogelberg, all the typical boyish, blandish, yet beautiful voices of the 70's singer/songwriter prevalence. But, also molded by what feels like a autumanl-fogged Zombies-arm-in-arm-with-Byrds melodious muse. It's dashed with a charming naivety - with titles like "Seventeen on the Planet," the 80's-b-movie-tinged fantastical "Earthian Children" and the sax-soaked "Adolescent Daydream."
It is dashed with melodramatic cymabl sheers, mystically cooing synths and head-swimming guitars lofting into spacey-whirled tones. When the mood really starts to detach itself and float up into more atmospheric vibes, his voice zooms up into a disarming falsetto - all the while the steady strumming acoustic guitar is the anchor below, while we meander like a exosphere-flirting kite, high on ultraviolets and transfixed by the glow of Mars up ahead.
Heavy with that warm AM Pop and flirting with soft-rock, but...at it's heart, a classic neo-psychedelia-folk record, wrapped in the handsome grace of waltzing, shuffling chamber-pop. I'm glad it's seeing the light of day.
That said....this day, this day is insane with beauty - so get off the computer, go out and enjoy it.
Then come back and take a listen. More info at Drag City Records - and from Eubank's original label, Yoga Records.
It's out May 18 - more info
Posted by jeff milo at 6:24 AM