It wasn't about one band, even if one band was always involved. There was never a spotlight. The illumination was throughout the room, shining on every player; a revolving cast of 2-3 new bands every month, loading into a pool hall, just a pool hall (not a concert venue) to commemorate another Duendeseday.

It wasn't about a scene, or the scene or whichever scene...even if its existence, it's organic design, it's natural vibe struck a blend of easygoingness edged with healthy-competitiveness, helped to evoke a collective sense of a scene. Duendeseday was like Fight Club for the prog-rock crowd, or a gang for garage rock ruminations, or a symposium on the philosophies of punk and psychedelia.

"We just tried to create...a situation..." says Howitt, "that you could walk into... Not many people were doing exactly what we were trying to do, so we had to continue trying to create a certain...circumstance. The situations that we would want to be in weren't being offered to us so now we had to make them up."


Duendeseday could transform the vibe of the room, be it Club Bart's (or, eventually, The Loving Touch,) into that of a club house. The stage wasn't a stage so much as it was almost a boxing ring or something cruder, purer, sweat-splashed, almost like a splay of mats on a gymnasium floor. It became a place, an event, a night, where a band could step it up - a collective injection of encouragement from the hosts of the night, Duende - for their invitees to either experiment... or go for broke. Try something new. Or try to top anything that's ever been done before.

Howitt: "It always had a party atmosphere That corner stage of Bart's just invited quirky behavior. It was hard to keep people off of it. Onetime a gal came up and licked our bass players face mid song then did her bet Stevie Nicks into the mic. We started to invite more bands to play and it only brought more people.
"I guess at some point I realized it became our "big gig" each month when owners of other bars would come and check it out and ask "So, how do you set this up?" Or promoters when they started picking up the other Wednesdays between the Duendeseday's because people thought something was happening every week."

This sense to erect a clubhouse, a gathering place, a commons -for other bands- came when Duende themselves lost their practice space. They had cozied into quite a cool little spot in the somewhat ghostlier side of Ferndale where it's old, half-abandoned industrial zoning, sharing a comfortably cluttered up spot with various local groups including Red China, Wildcatting and many more, from 2006-2009. This was horrible timing as the three bands were just about to go on tour together. "Real high drama," says Howitt, recalling the "mad rush to deconstruct and relocate what took three years to horde into that space."

Duende had started rehearsing twice a week in preparation for the recording process of Remnant Of A Remnant at N.Y. HED in Manhattan's lower eastside six months prior to this and they'd realized how rewarding that intensive regiment had been for their playing. "When we got back from tour we wanted to keep up that kind of 'endurance training.'"

Club Bart became Duende's personal "endurance training," but it also harkened back to the respectable lineage of rock n roll residencies like MC5 at the Grande Ballroom or The Ramones at CBGB's (...or even McCune's former Phoenix-based band The Hypno-Twists, with their respective weekly residency).

There definitely was a kick-out the jams ethos to the eventual incarnation of Duendeseday, as it was throughout 2010-2013, as it transitioned into The Loving Touch.
Howitt: " think every band wants to be the best one on any given night. Most bands are buddies to some degree so it's no ill will. You just are trying to out rock everyone. A good band does that from the inside of their own group first. You have to out rock yourself and your bandmates. If you can get your act together all of a sudden it communicates. The love light is on. With that though we are right up front for each band in support but in hopes also of getting melted!" 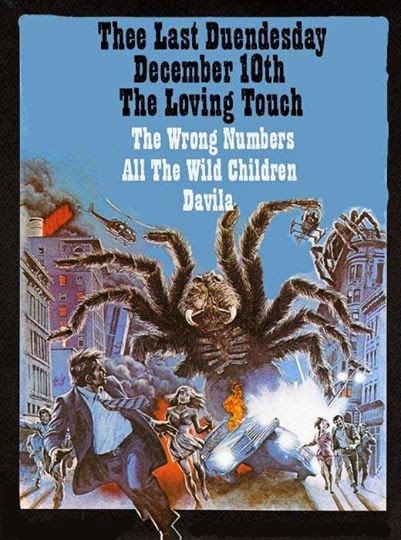 Even if you never attended a Duendeseday, it's an important part of your local scene's history (and I do mean the Ferndale scene...).

The Loving Touch really was just a pool hall (that hosted occasional...once/twice-a-year concerts). But with Duendeseday, setting up a stage over by the where the Foosball tables are, now, (with the band providing their own PA....that's right, no sound systems yet), it became a thing... Live music could work inside the Loving Touch on a regular basis. Duendeseday helped prove that...

Howitt: "It definitely grew beyond it's intention but always kept the party in it. I think we all at times had hit a wall with it. Suddenly it's the first Wednesday of the month AGAIN and we have to break down our PA, our whole practice room and see about backlining some of the gear. It's snowing. It's raining. It's close to a holiday. But once it's all set up and the bands are arriving and faces you know and don't start smiling in the door, it's really easy to give over to it."

"There is still a back log of groups we never got to, sadly."

It wasn't uncommon for bands, zazzed-up as they broke down their set having just finished a Duendeseday set to say they'd like to get on another one as soon as they could...

"I remember one show with The Wrong Numbers where Woodward Avenue blacked out," recalls Howitt, "and that left them stranded on a dark stage. Adam Stanfel was in his car when the lights came on and Laura got him to come back and finish the set."

Howitt: "There was also a great St. Patrick's Day show with The High Strung. Stephen Palmer hadn't been in the band all that long and they were almost lifting off that corner stage. Another time Telecollision did their Jon Spencer Blues Explosion set and treated the stage like a killing floor. Hard to follow something like that.....Other great times were when it was someone's first gig. Like Cloud Social or Futurebabes. Both alumni from Beggars. So much excitement like it was their first band even. The Savage Seven and Sharky and The Habit also has their last shows on a DUENDESDAY.

No matter what... "All the dates had some flavor. Onetime a couple dudes dressed in Egyptian Pharaoh head gear and walked around. Many times it was someone's Birthday. People would come early then leave or just for last call. But came. Some to play pool and just not know what was happening. Drinks have been thrown in faces. Heads buried in laps. Frank Woodman ending up in the MC role spontaneously...."

You can't force a night like this, with all its energies, into existence and meticulously mold it's vibe to how you want it. As Howitt put it, you just "create a circumstance..." and open a door. The music that's made after that will be steadily inspired by the vibe that naturally emerges...


{pictured above, Duende at an early incarnation of Duendeseday at Club Bart, circa 2010}
Posted by jeff milo at 6:43 AM