From this week's Detroit Free Press

Relationships are complicated, but a song about relationships doesn’t have to be! Local quartet Best Exes elevate the charms of the sweet and the simple, reveling in their counterbalances, with singer/guitarist Linda Ann Jordan’s dulcet and breathy mid-high vocals doing duets with singer/guitarist Jim Cherewick’s lower, rustier, lightly-rasped warble.  The pair, for the record, are not each other’s “exes,” even if their respective past ‘exes’ helped inspire a song on their debut album (out this weekend on Palm Tapes).

Cherewick and Jordan were writing songs together in 2014, unsure of where it would go, until they wound up booking a show. That led to the swift addition of drummer Maria Nuccilli, to make it a trio for a year’s worth of shows. Earlier in 2016, Ann Arbor-based bassist Erin Davis (also of Loose Koozies) made it a quartet. Cherewick lives over in Ypsi, where he can be found working on graphic design or splitting more singing duties with a couple other bands. Jordan is here in Detroit, working as a legal aid attorney and with the Seraphine Collective, a community of feminists working to promote underrepresented musicians and artists in the area.

“Weird Kinda Nice” is a signature Best Exes ditty, with its jangly/hazy traipse and lilt, pushed lightly by shuffling percussion, surfy basslines, reverb-ribboned lead guitar curls and that charming smooth/grainy mesh of the two lead vocalists. That song and several others on this full length cassette album, paint poignant pictures of the possibility of finding platonic love among friends and complication-free companionship, through singsongy-earworm melodies, minimalist, waltzy arrangements and guitar lines you can hum-along to. Spending time with their album, Cactus, could help redefine your perception, not about what love is, but about what a love song can be.

You can read my interview with Jim and Linda in this week's PLAY, Entertainment Guide, in The Detroit Free Press.

Meanwhile, I actually had the opportunity to chat with every band member in Best Exes while building this feature. Maria Nuccilli and Erin Davis are integral components to the nuanced charms of Best Exes minimalist-rock/pop productions. 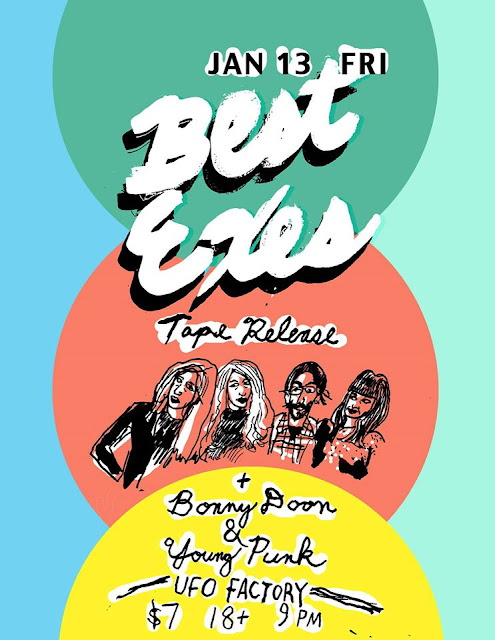 How does Best Exes compare to any previous musical endeavors? Maria and Erin, I'd like to know more about what your roles have become since joining...
Erin: As for my joining the band, I didn't know much of Best Exes beforehand, and I don't think I had actually seen them live, until that point. I vaguely remember being at a show or bar and my friend Jim asking if I would be interested in jamming sometime, and I said sure! But I wasn't sure if it would ever actually happen, so it was a pleasant surprise when he texted me a specific time and date to start playing. I listened to all of the songs on their bandcamp and came up with bass parts for them, as I prefer to be as prepared as possible for practice - if I can teach myself a song before a practice by listening to a recording of it, I will.

Maria: The other two bands I play in are more improvisational-based, so it’s nice to be a part of an outfit with different songwriting parameters. It keeps my playing in all three bands fresh! I’m so happy Erin joined. I loved the two guitars and drums thing, but Erin is so skilled and creative and brings out so much in Linda and Jim’s songwriting. As a drummer, I think my role has become official counter of song parts when we're writing, and also official compare-er of Linda's chord progressions to early Julian Cope (see: "Laughing Boy" off of Fried). That might be my role in every band though? Jim is official recorder of new songs so we can listen back after a few weeks of not getting together.

How do you make a band work when its members are split between cities, with Erin in Ann Arbor, Jim in Ypsilanti, and then Linda and Maria being in Detroit...

Erin: It is definitely difficult to juggle being in bands with people who live in another city with a full time job. It's difficult for me to do things during the work week and I honestly wish I had more availability. However, I'm really fortunate to play music with really great people whom I love and I wouldn't be in several bands if a didn't enjoy it, so I'm making it work for now.

Maria: When you’re busy, sometimes the hardest part is showing up for things. I don’t know how we make it work, but we do. I’m in two other bands, and when I feel really spread thin, the thing that makes it work and worth it for me is viewing rehearsal not as a stressful obligation but as a needed meditation.

When you listen back or reflect back upon the sonic snapshot that is Cactus, what do you think it says, how do you feel about it, what’s it convey to you?

Linda: I think it says that we are bad at relationships, mostly.

Linda: We are already working on new songs! We just recorded one about moving to LA.

Jim: i'd like to start 6 more bands…and finally settle down. I dunno…more bathroom selfies?