Brent Smith is a hip-hop artist, emcee, and community activist. Detroit audiences and readers will know him as part of the quartet Cold Men Young, and well as from the duo Passalacqua. He has also done commendable community service work with the Boggs School of Detroit, The United Way of America, The Motor City Grounds Crew, and, most recently, helping a project to bring cultural events and concerts to a refreshed Chene-Ferry Park.

NOW... Smith recently wrote a feature on Mic Phelps and djkage's The Grand Design pt. 2, and I am thrilled to have him as a guest contributor to this Michigan music blog... I'd wager I couldn't find a writer to elucidate the works of Phelps and djkage, since few will know Phelps better than Smith from their past collaborations, as well as a long-spanning, close-knit friendship. 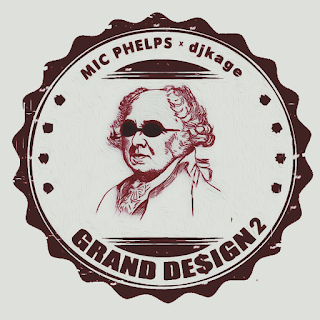 It’s always been about the money... Sure. It’s by God’s grace. I believe in divine intervention. But, at the end of the day, without the money, it’s still a wish. This took me 30 years and two Grand Design projects to figure out....
Du...

The first time around, Mic Phelps and djkage were just figuring it out, too. Back in December of 2014, they released The Grand Design: a profound artistic statement about philosophy and capitalism expressed through rap. Remember Andrew Jackson owned slaves? Well now Harriet Tubman is going to be the first woman on american currency. It makes me think that Phelps & djkage had an agenda from the very beginning and that was to show that... ... 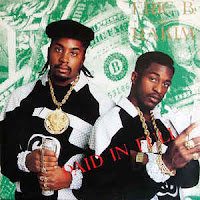 ...IT’S ALL ABOUT THE MONEY.
While listening to Grand Design 2, I can’t help but think about Eric B. & Rakim’s Paid In Full. When Rakim spits “I nominated my DJ for President” on I Ain’t No Joke, he’s validating Eric B. as the people’s head of state. Phelps possesses the same confidence in his DJ. djkage slides all over cuts like Saucey and IDFA certifying his position as a producer in the Detroit Hip Hop diaspora. Phelps plays the role of Rakim, breaking some kind of fourth wall to speak directly to his audience, reminding us that rap is a war.
What the f*ck you nghs telling me,
I’m charged up like a felony
I got the rap, I got the melody
A A milli what I better see
I’m looking for a better me
I’m tryna leave a legacy


They can’t define my pedigree
--Mic Phelps, Keep It Running


This is about Mic Supremacy. This is about gold medals. The most decoratedathlete in Olympic history, swimmer Michael Phelps retired with 23 gold medals. 23! Michael Phelps, the swimmer is coming off one of the best years of all-time...! Meanwhile, the rapper, Mic Phelps, shined in 2016 with the release of The Wave 4.
Competitively, there’s not too many rappers rhyming like Mic Phelps. Detroit or elsewhere. While swagging, he raps truth to power in BIG DAWG: “I’m flashy like a camera in a pot of gold.” djkage plays live bass and mixes a piece from the Omega Man soundtrack which I thought was a Carl Thomas sample. The mix of Phelps’s slick talk and kage’s emotionally whimsical production sets the stage for the rest of GD2.
Easily my favorite track is Kush Cologne. It sounds like an opening number to a black Batman spin off. Superhero music is what we’re all here for in 2017. Kage drops a hard-boiled noir that plays out like a scene in Sin City. Naturally the next song, H.O.E.(Heaven On Earth), follows as the most earnest track on GD2. Phelps raps:
I’m tired of innocent murders,
I’m tired of funeral lines,
I’m tired of people telling me to pray
But then I get no reply
Maybe we was meant to go through it,
Maybe it was all by design.
Tamir Rice get shot,
Birdman still shine.
-       Mic Phelps, H.O.E.
If it sounds like Mic Phelps and djkage came out of nowhere, they didn’t. Both Phelps and kage are veterans on the verge of mastering a cultish sound. Dick Gregory is here too, weaving together stories about Buffalo Soldiers and that time he met Hugh Hefner. Hmph?!?!? This device serves as a distraction from Phelps’s writing and rambling. And in a way, Dick Gregory assures us that the stuff Phelps is rambling about is more serious than we think!
The Afrikans are angry. They know this is a trick. - Dick Gregory
The one glaring surprise on this project is the low count of weed references (ref. Kush Cologne). Oh, the references are there but they’re hard to catch at the speed Phelps raps. Back 2 U is a bit more slowed down and Phelps maturely waxes about love & commitment. The feature here, Kopelli of Cold Men Young, got married this past Summer ‘16 (#HouseYoung) making for an authentic verse and heartfelt vocals from Pierre Anthony.
In a lot of ways, GD2 is a data point for growth. If GD1 was the blueprint, GD2 is the build out. Sides will clash and classically debate which project is better. GD2 has too many party songs. GD1 is more real. Real compared to what?...Itself?

When Eric B. & Rakim mastered their formula on Paid In Full in 1987, nobody else in the game had better beats or melodies. The same can be said about GD2. There’s an urgency here that says I need money and I’m sick of digging through a pocket full of lint. GD2 is that check for the rent. Like Negus Arubis says, “Get down or lay down.”

There’s no time to just kick it because we are in crisis mode. Donald Trump is the looming president! Things will go on as they have before but in a rapidly changing city like Detroit, we have to remember that artists like Mic Phelps and djkage are the real influencers. GD2 is the burden of proof. We just have examine it even closer. PUMP UP THE VOLUME.