PJ's 10 Years at the Lager House

...in fact, I can recall Troy Gregory once referring to this place, casually, as "...church." 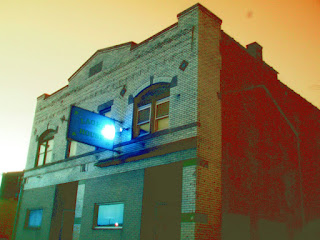 PJ Ryder is marking his 10th year in charge of The Lager House in Corktown. I can't help but get nostalgic upon any occasion of commemorations for a place like this..., because for me, it's where the story started. Others of you out there might have another venue that served as your gateway to the scene, a root reference point, some happy place in your mind where you return to refresh your enthusiasm for show-going ventures; that place you saw your first show (or shows) that really mattered to you.

I don't think it's merely chance that the first shows I saw, that mattered to me, were hosted at the Lager House. This is early 2004, I'm still 19..., and I'm seeing The Muggs, The Demolition Doll Rods, The Mistreaters,The Paybacks.... The place was very dim, a little dank, and parts of the carpet seemed permanently soppy with spilled beer. The fitful din of this cavernous hall was an invigorating sanctuary...

But I'm not here to linger over indelible glory day's memories... Let's jump ahead a bit into the future. PJ Ryder bought the Lager House in 2007, having been in the real estate biz for a number of years, and before that he ran a record store in Ann Arbor. But most of that back story can be found here, on a previous blog post.  Let's jump from 2007 up to 2011, and look at a photo of me taken at said-Lager House, (clearly having an excellent time!) 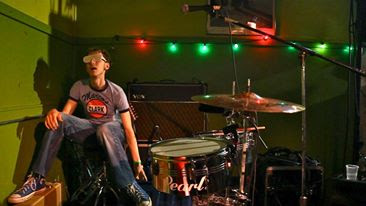 As I said, I don't think it's a coincidence that the Lager House became a special place in my regard, a vital catalyst for my future enterprise of local music journalism, (especially early on with concert reviews). You'll hear about the mythologized Gold Dollar in any origin story for The White Stripes, but it had already been closed going-on three years by the time I started coming around. Something had to fill that void - and in those handful of years before PJ came in, the Lager House pretty much picked up that torch.

As I said before, the place was a bit ramshackle in those early years. Credit goes to PJ for coordinating a complete refresh-and-refurbishment the ol' rock club, re-firing up the kitchen in the back, relighting its dusky corners and re-painting over its scruffier palettes. So PJ's first five years overseeing the Lager House led to a notable rejuvenation, the next five years only assured its reputation for regularly programming performances from local legends, up-and-coming indie-acts and hosting higher-tier touring bands from around the country. 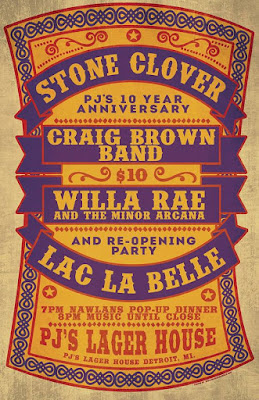 To celebrate, PJ's Lager House hosts a 7pm 'Nawlans-style pop up dinner, with music beginning a little bit after 8pm. You'll see/hear the kinetic celtic jams of Stone Clover, the soulful country-rock of Craig Brown Band, the goth/baroque gypsy-rock of Willa Rae & The Minor Arcana, and the rootsy/bluegrass Americana of Lac La Belle.