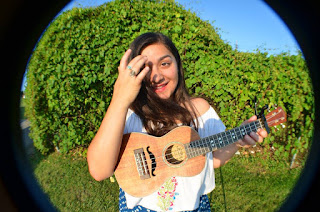 Carmel Liburdi has a power. She's conversing with you in song form, with each discussion point curled into a subtle melody. It's just her voice, her words, her guitar, and her eyes too... Unlike most singer/songwriters, she doesn't close her eyes during the zenith of a song's emotional impact, but instead opens her eyes wide and trains them right out into the audience, often connecting with the gaze of a specific person in the crowd. And that gesture, that expressive and engaging style she has, along with the forthright lyrics that spill it all in creatively poetic punches, makes you that much more aware of your own feelings.

Liburdi celebrates her latest album release on Friday, Nov 3rd at the Hamtramck Korner Bar; the album is called Insomnia Slumber Party. And to go back to her unique way of engaging with you, through a song, it is emblematic to the essence of her music that both the recordings and the performances are delivered with so much personality and charisma, and yet address or presents tougher subjects and wistful sentiments that most of us might typically like to avoid or suppress. She sweetens up whatever might be scenes of sadness with her mellifluous voice and sense for melody. So it encourages a more active self-contemplation..., and to not be afraid of that..., really. The vibe is one that acknowledges the dragging powers of distress or self-doubt or heart-break, but extols the restorative resolve of forging on.

INTERVIEW
What sets these newer songs apart in terms of how they felt to write them?
The songs on this album are more about relationships than other albums of mine -- including my relationship with my own self. A lot of them were inspired by individual people, but I still broadened them a bit because I think it allows people to hear their own story within the song if I leave something to the imagination. There was a lot of introspection and metaphysical growing pains going on during the creation of these songs. I worked through a lot of things while writing them; the process allowed me to understand my feelings more. Some of the songs even surprised me a little, almost like a dream--it was like my subconscious mind coughed up some words and then my conscious mind learned from it. One huge thing is there are no piano songs on this album! Piano was my first instrument and my first album is almost entirely piano songs. I didn't intentionally rule it out, just the past couple albums I was on the road a lot more and I could never bring a keyboard so it naturally phased out a bit. I would love to bring it back though!

What has been some of your biggest motivations when it does come to putting a song down....in terms of considering the ears that will hear them?
Well, I try to give people the most authentic form of my feelings in a way that I think they'll relate with. I aim for the connection. Sometimes I write something for someone to express a feeling to them (which happened a few times on this album actually), other times I see a story in other people's lives that I want to write about or I even create a character. Either way, I definitely write with the intention of reaching an audience and I try to balance the need for expressing myself with the need for others to feel understood. People and world events strongly motivate me.

Anyone encountering you for the first time would make the presumption that you're a folk singer... But you have such a percussive style to your playing and your singing that it feels that it has so much oomph - and it has so much more personality.... And oomph and personality are things people might associate with indie-rock or jazz or pop or punk -
So that all being said... Who were some of your formative influences, or where do you draw the courage it takes to be vulnerable, to be minimal, to be very forthright in your craft?
I grew up on a strange combination of show tunes, and jazz (as far back as 20s!), and grunge and 90's alternative. I also had a huge love for rap and r&b growing up, and as I got older I got in to pop rock, like Blink 182, and ska/punk, and found a lot of support from the punk community here in Detroit as a songwriter. My earliest influences while writing were bands like Queen, Foxy Shazam, Kimya Dawson, Say Anything, Panic! At the Disco, to name a few, and I think those bands inspired me to put myself out there more. But really it's tough to say where my sound comes from, I guess I just had a lot of feelings and I needed to express them and maybe it was the way I was raised, but I never had reservations about being direct with my lyrics. 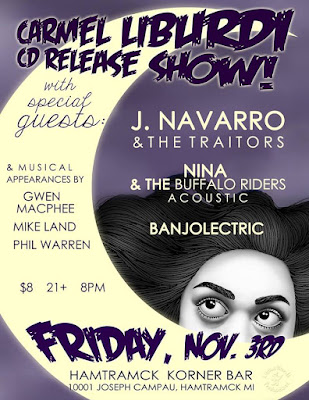 In what ways will the last year's worth of performances, or even the last year's worth of experiencing the creation process of insomnia slumber party, influence/inform/change the way you might write or approach or perform your next piece of music?
Seeing the personal turn that my writing has taken is something that's been interesting for me, and I hope I will continue to write from that place where I'm not judging or hiding myself. These songs represent a lot of maturing that I've done; huge and painful lessons that I've been learning. It's shown me a lot about myself. A lot of times when I write a song I'm deep in my feelings, and sometimes there's clarity that I don't reach until later about the song itself--sometimes even years later. I would say I was much more aware of what was going on within these songs when I wrote them, as opposed to other albums. So I think moving forward I'll be writing with more of that clarity--at least I hope!

Anything else to add about Insomnia? I remember you recorded, mixed and mastered Patron Saints by yourself in your basement...
The last album, I did everything myself. However, this album I designed the album art and merch and Steve Gualdoni did the recording and mixing. In terms of just the album in general, the name "Insomnia Slumber Party" really reflects what I was going through, literally and figuratively. It's about the struggle of darkness and light within yourself, and the good and the bad in life coming together in one ironic package that's maddening but kind of fun in its own way.