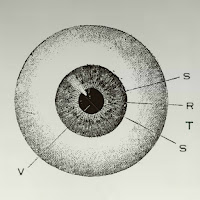 
VSTRS have continually sought a heavier, headier kind of trip. The arrangements are layered with reverb-coated guitars and kneaded with nice echo and dreamy delay, the drums have the horsepower necessary for stratospheric escape velocity, the synths/organ element oscillates with stimulating disorientation, and the vocals have an otherworldly warble and overlain haze that evokes an augmented perceptiveness...

The brooding vibes of metal, the detached meditative murk of shoegaze, the magnetic melodies and gliding intonations of dream-pop, the furious kind of feedback motifs that make you feel like the material world around you is disintegrating and reintegrating right around you as the song culminates into extended crescendos...

VSTRS are constant travelers. Not just staying in the dark sides of post-grunge or in the clouds of psychedelia, but thriving on propulsive tunes that always have a vibrant pulsation. A couple paragraphs below, you'll find another song to stream; a 15-minute epic that closes out their second album and features violist Sarah Rayburn (of BURNS). The band is made up of Eric Myers, DJ Sovey, Michael O'Connor, Zach Pliska, and Katie Galazka. The lyrics and concepts were by O'Connor, who co-produced this album with Myers. Laid down at Tempermill Studios, it was engineered by Myers and Jim Kissling.

INTERVIEW
There's a lot of different flavors, nuanced rock energies going on in a typical VSTRS song... What was it that drew you all together, in terms of, ya know, shared sensibilities or appreciated styles or inclinations toward certain aesthetics...
Zach Pliska: I think we all wanted to do something that feels alive and natural. We don't record to a click, we don't use backing tracks. Our songs speed up and slow down in parts, there's a lot of room to breathe and stretch out. Performances aren't often the same.

Michael O'Connor: Yeah, alive & natural was a large part of the attraction.  When it's fun getting together and everyone's open to the moment the structures tend to build themselves to a degree.  That usually brings out a better energy anyway & tends to wear well over time.  With the personalities involved it ended up leading to a push & pull effect of space & aggression where everyone could see themselves in the tunes.

I love that your band, and several others that I could name... have really been blurring the lines between dream-pop, shoegaze and "psychedelia..." It's something I'm encountering more and more in the Detroit music scene, to the point where I can't say that one band is either one of those genres over any other.... What is the essence of VSTRS

Michael O'Connor: I think blurring the lines drastically is, perhaps, an unconscious way of using your influences to find a more original place, which isn't so easy to do.  With VSTRS we're aware of the sound but with collaboration & a good feedback cycle there's nothing's stopping something potentially interesting from surfacing.  A good idea is a good idea I guess.  The business of music is mostly in shambles from a creator stand point so there doesn't seem to be much sense in limiting any genre that you might be into or would make a song sound better.  There's also a healthy appreciation for psychadelia, dream-pop & shoegaze within the group... although I can't say Eric tends to spends a lot of time in dream-pop land or that Zach is deep into psychedelia!

Tell me about the recording experience..., and what distinguishes this record as a whole, in terms of what it was that you started really working towards, listening-experience-wise, as you put it together

Michael O'Connor: 'Dark Secret' is a song that the band seemed to take to right away, & would on occasion ask me about as the record drew nearer.  The title refers to the psychological reality that a dream is probably a lot more powerful than a day's thought process.  Yet, not often lucid or remembered much because it just escapes one's grasp - as most do.  The characters created are perhaps just as much in the dark about what's being foist upon them as others can be in our tangible lives, & as that tangible reality is an interpretation of the mind, so is dreaming.  The karmic cycle unwinding might be fairly equivalent, although I don't believe we think of it that way.  The video is a loose concept of a representation of how a dream might look/feel.

The first record was encouraging; enough so that everyone thought we should keep working and improve on it.  The only concrete thought on differentiating initially was to have DJ (Sovey) use a grand piano whereas organ had a larger role on the debut.  I also focused a little bit more on songs I'd crafted than I had initially and I think that's reflected in few places.  Probably more than anything though was the willingness of the band to take on a multi-themed longer tune that is really the centerpiece of the record.  I give them all a ton of credit for bringing their talent, vision & professionalism to that one... & all of the songs really.   There's a healthy interest about what's being created in VSTRS without much wasted motion, it's a pleasure.


What about the album title...
Michael O'Connor: Pandemonium Seesaw is a line from the song 'Cirkus' by King Crimson, and it evolved from a term I've long enjoyed into the LP title.  It seemed to reflect on the material somewhat but also increasingly on these media-inflated times where strings are constantly being pulled and manipulated in different directions.  Fear & loathing, divide & conquer as usual but daily and at an outrageously fast pace.  There's certainly a purposeful intent to distract and placate at break neck intensity.  It seems to create a feeling of dread where the wolves - paradoxically or quite literally in a metamorphic sense - tend to be at the door.  It's a heaviness from our government to corporate America to kidrockistan that is at times hard to avoid and takes a toll.  Lyrically at times, and perhaps musically in moments, the record spun in that direction. 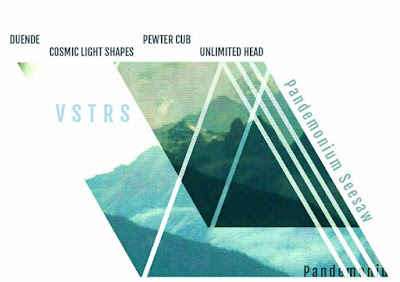