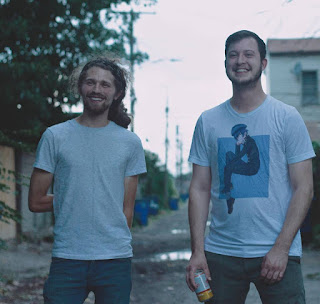 In a way, I've written about Zachariah Jarvis (above, left) and Matthew Beyer (right) before..., they're the bassist and vocalist/saxophonist, respectively, from the ambient post-rock ensemble Ancient Language.

Now, the duo are unveiling a new music project they've been developing over the last three years, joined by Matthew Romanski (of Earth Engine) on drums. Holiday Flower's debuts their first album on August 31, with a performance at Outer Limits Lounge. This will actually be a dual-album release, as Romanski's solo project, Radio Wire Empire, also has new material ready to release... (Stay tuned, next week, for more on that!)

"Grey Skies in Berlin" is the lead single from the new Holiday Flower album.


You float through the first 30 seconds of this album and the icy synth tones, ascending vibraphones and pensive piano makes it feel like a cousin of that stratospheric post-rock sound they've already honed with Christopher Jarvis in Ancient Language, but then those rhythms kick in... Zach's buoyant bass all but grabs you by the wrist and coaxes you over to new terrain, a place with an ebullient groove where Beyer's tight but frenetic guitar cascades under those smooth, breathy vocals of his... But what seemed like a tender, pared back bit of space-pop boogie suddenly bursts at the chorus: Romanski's drums thunder in and that soft piano fades to the background while those guitars start to glide with a bit of a gnarly growl.

Holiday Flower's forte is forging that balance of dynamics. Even when those choruses crest voluminously, the bedrock of Jarvis' expressive bassline and Beyer's mellifluous vocals never diminish in radiance - it's as though the arrangement's got a flightplan for your ears, but you never lose sight of the ground, the original rhythmic runway that launched you... Maybe I'm off on a tangent here, but I just think this tune evokes a sense of soaring... But we don't have to read any of my own words about Holiday Flower, because we can flow right into some Q&A with Beyer and Jarvis (below).

How and when did you start making songs as a duo separate from AL?
Zach: A few of the songs on the album have been floating around as skeleton songs on Matt’s computer since 2015. We actually began writing some of these songs before Matt had even joined Ancient Language! But after several months, drifting into early 2016, we slowly expanded on the songs in hopes of releasing something a little bit sooner. But to no avail, Holiday Flower was put on the backburner for nearly a year and a half while we dipped into a plethora of other projects. It wasn’t until we agreed to play at a friends birthday party, New Years Eve of 2017, that we dove back into the material to finish it.


When you did start working together, what did you both feel like you wanted to go for, style-wise, sound-wise, vibe-wise? What were you drawn to, aesthetically, with Holiday Flower that was distinct from AL?
Zach: I think we both wanted to play music with no rules. Holiday Flower embraces lackluster elements and spins them to our advantage. It’s a chaotic maelstrom of ups and downs, instrumentally and lyrically. I think the difference is that Holiday Flower is silly, in and of itself.


Talk about your friendship: how long have you guys known each other? What's it like making music together, what makes that chemistry work..., what kinds of influences you share, and what kinds of influences do you contrast on?
Zach:: We became friends back in 2010, in high school French class. And basically ever since then we've been playing in bands and writing music together. It’s very natural at this point. I think what makes it work is that we don't get too involved, or attached to any one song in any one way. It makes it easier to be open to ideas from one another.

What was the writing and recording process? And, just curious, will the live set up be pretty similar to what you recorded?
Matt: This song, "Grey Skies in Berlin," was written in the same way as a few others on the album. Zach started with the chord progression and I went in and added guitar and drums. The recording process for this song was drawn out, actually. All of the instruments were recorded in my basement over a year ago. The vocal part was all that was needed. Zach wrote the lyrics and I added some melody to them. Vocals tend to always be the last thing both written and recorded when I’m involved. Maybe it’s perfectionism, most likely it’s just procrastination. The live setup will be guitar, keys, bass, and drums with plenty of electronic sampling to cover the other instruments on the album.

What's on the horizon?
Matt: Our next step as a band is releasing this album and performing it more around Detroit. We also have a few remixes and additional material for an electronic dance set, so we won’t always be performing as a rock band. The album's out on August 31st, we're playing at Outer Limits Lounge, and our friend, drummer of Holiday Flower and singer of Earth Engine, Matthew Romanski will also be releasing his latest album from his project Radio Wire Empire that night.