Soviet Girls - New EP ('Filled Up With Nothing') 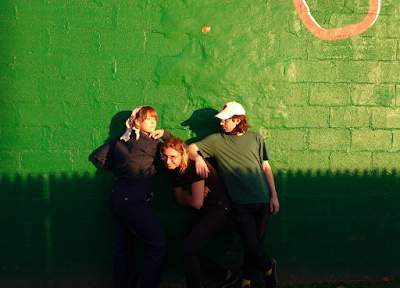 Soviet Girls are a new luminary among Detroit's recent renaissance of lo-fi melodic indie-pop. Their debut E.P. came out just last week, blending hazy dreamy surf-rock slowed-to-a-pensive-stroll ("Caught In A Lie"), to the rougher-around-the-edges ("I'm Not Your Girl") that kicks up the tempo, the cathartic chorus coiling into a melodic yell and the distortion bubbling over into a reverberating crescendo.

Soviet Girls are Anna Baghina (vocals/guitar), Devin Poisson (drums) and Jonathan Franco (vocals/guitar). And this band hits all the sweet spots that Deadbeat Beat, don't., and the ever-missed Rebel Kind have splashed upon on their respective recordings. A song like the E.P.'s titles track, "Filled Up With Nothing," is a shining and all too brief example of their knack for knowing how much space to get each instrument, with arrangements uncluttered by showy riffs or busy fills, it's like the drums, guitars and vocal melodies are gracefully interlocked in a sweet sway across a linoleum floor with socks on.... And, damn it, that image came in to my head before I looked up to notice the album cover... "Think Back" closes things out with decorous guitars jangling out those idyllic warm tones perfect for a summer road trip soundtrack, kicked along by an eager snare and an invigorating crash of cymbals, while the vocals attain an airy, far but near quality, like a beckoning horizon that you're driving towards.... Always driving towards....

Anyway, that's how I hear it...! Soviet Girls are performing kind of a release party for this new EP on Monday, August 6, at El Club. Well, technically they're opening for Austin-based singer Jess Williamson--but nevertheless, it's your next opportunity to hear these songs live! MORE INFO.