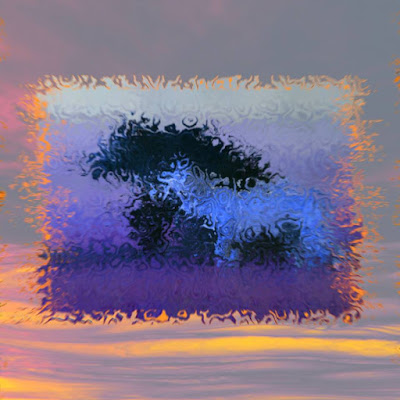 It's been five years since Radio Wire Empire released an album and seven since any of the works of songwriter/sound-creator Matthew Romanski appeared on this blog. In the interim, my ears were drawn to another band involving Romanski, Earth Engine, wherein he facilitates guitar and lead vocals. From 2010-2013, however, this psych-pop/space-jazz project was an industrious enterprise for Romanski, releasing singles, EPs and even a double-album that blended synths and sequenced beats effervescent enough to keep his finespun vocals afloat through evocative aural atmospheres where he would "let the stars bleed down...," so to speak, in his characteristic lyrical style of blending the tangible and the surreal.

With "Lilac," he embodies a smitten spirit poetically calling out to his love, audibly energized by the bliss that's manifested in their time together. Everything is urgent and adventure is everywhere when you feel that kind of love, which is why we launch and soar into such an ebullient chorus ("Let's go! Let's go! Let's go!") That said, everything coalesces into a splendid pop package: the impassioned intonations of his voice through that chorus, the surfy splach from the guitar pickups/pedals, the dreamy curlicues of the synth melodies and coaxing bass, and then that sweet swelling saxophone through the bridge...it's like you want it all to linger for two or three more minutes more...

A full album is on the way! Next Friday, Romanski releases the newest Radio Wire Empire--the first in five years. He's joined by Matthew Beyer (of Ancient Language), John Raleeh and Nik Landstrom (of Earth Engine). Beyer is also in a new band called Holiday Flower, and Romanski's on the drums for that project. With all this intermingling, it's only fitting that the August 31st release party is also the occasion to hear Holiday Flower's new album! Duchess, from Chicago, will be joining the lineup at the Outer Limits Lounge. CLICK HERE for more info.