"This gets people involved...artists...walking and screaming down the road together...There's not enough of that, man!"

The "Blowout for visual artists" is upon us - Detroit Gallery Week kicks off on Sept 30th - "highlighting the region's remarkable contemporary art scene with openings, lectures, studio tours and special exhibitions across metro Detroit..." ArtDetroitNow has a list of participating galleries -as well as a schedule of featured events. DC caught up with artists and gallery director Lisa Marie Krug, of Whitdel Arts, an art gallery on the fringe of Mexicantown opened under the umbrella of the C.ontemporary A.rt I.nstitute of D.etroit about one year ago.

Whitdel is currently transitioning into becoming the CAID's primary outlet for artistic exhibition, as the original space on Rosa Parks has "legally" transformed into an operating television production studio. -A new PBS, if you will, spurred on by it's progressive talk show, Tonight at the CAID amongst many other recently brainstormed programs, coming down the pike.

Much  less a traditional gallery, Krug stresses that this space (originally started as the Ladybug Studios under CAID's direction a few years back), is more of a community center for aspiring/curious artists, would-be painters, daydreamy designers, and those who want to get their hands dirty via creative expression but maybe don't know how to get started, or don't know the ins and outs.

Gallery Week is about reminding the community that these spaces are for much more than just standing and staring at things hung on a wall. Lecutres, like those offered at Whitdel, Detroit Artist Market and more, can inform artists of all the nuanced upkeep it takes to be self-sustaining, freelancing producers, photographers, artists, designers, whatever - as well as feature insightful discussions about the meaning of art.

Engaging and educational, Whitdel is equipped with a media center and classroom space for various workshops and lectures.

"I hope Gallery Week shows that there's that kind of attitude going on," Krug said.

The ladies behind Whitdel Arts (Krug, along with JenClare Garwan and Lauren Montgomery) share that attitude with various arts organizations around Detroit, namely the gang behind the unconventional/experimental film house, the Burton Theatre - who recently paired with Whitdel to help program a film screening this coming weekend (more info at Whitdel). "(Just)...try to create an inspiring environment."

"We're trying to honor (Detroit)'s past. This is the city of making-something, whether it's cars or music or anything," Krug said. "Honor that past, but also keep going. Some don't realize it's a tremendous opportunity to be here - what other city could I go to and become as heavily involved, so quickly, in the arts community, as here in Detroit? It's an inherently DIY city. It's just one of those things, here, you can do whatever you want..."

"Whitdel and Burton share that attitude," Krug said, nodding to the theatre's welcomed run of cult films through 2009-10 before having to close it's doors. "Just, find a way to do it if you wanna do something." 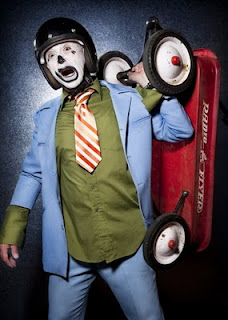 -
And of course, whatever intriguing/provocative film that Burton decides to screen at Whitdel - Attendees will receive an update on when the Burton could open permanent doors again (and where said-doors will be located)...

~~And then there's the Art Parade - put together by Art at Wayne - and bolstered by CCS/WSU students - which kicks off the Gallery Crawl next weekend. "Led by Satori Circus and art students from CCS and Wayne State University, the parade winds its way through participating venues."
-Parade route and rally stops include: WSU - DAM - MOCAD - DIA -CCS


With burlesque-punk-provacateur Satori Circus presiding as Grand Marshall for the second consecutive year.

Russ Taylor, the fiddle-fit hockey-playing human behind the kooky clown make-up, recalls similar "crawls" or "gatherings" even back to his days playing in punk bands and punk clubs of Detroit during the mid 1980's. It ebbed and it flowed. When Satori Circus got a rebirth in 2006, Taylor said "I noticed that there was caberet, there was burlesque, there was fire-people and aerial lifts, there were performance artists and I wasn't alone anymore."

Taylor nodded to the a rise in energy, more galleries opening up and engaging the community, Detroit Artist Market, the MOCAD, and ArtDetroitNow.

Taylor even performed his own "crawl" of solo-performances in 2009, complete with a red radio flyer wagon in-tow, stopping at the Scarrab Club, Cass Cafe and many more culture spots and galleries for half-hour performances, eventually charming along, very pied-piper-esque, a trail of followers. That's when it hit Taylor that the energy, the need for these "gatherings" had returned.
For the parade/pre-crawl? "You know me," Taylor said, "I just blow up." He said the people working with Art At Wayne who planned the event, along with the CCS Students, are raring to go. "I just have to light the fuse..." 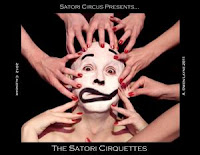 Taylor, aided by a group of close friends and talented collaborators (in design and photography) put together a Calendar - The 2012 Satori Cirquettes Calendar - with proceeds going towards the community-outreach non-profit Burners Without Borders.

"I'm basically (portrayed) being abused by 12 different women..." Taylor said. "It definitely all has my own slant of humor. I knew of or was a fan of these ladies and they knew of me and I asked if they were open to the idea of this kind of fetishy/tongue-in-cheek Satori calendar, with them in dominant sexual poses and Satori-make-up...and everybody went for it." ~

Taylor is currently working on two separate one-acts, very unlike any usual surreal/goofy Satori show - "much darker," one featuring more music the other featuring none. "Just relying more on expression, more on acting. We'll see what happens..." Taylor said.

~
And more info about Art around metro Detroit from the Detroit Free Press:
Detroit Design Festival will showcase the city's creative community
Posted by jeff milo at 12:42 PM