Annie Clark further hones her blend of the beautiful and the avant-garde on her third album under the St. Vincent moniker, where her resplendent electro-pop visions are rendered with an aggressive hand, shadowing her dreamy grooves and hooky waltzes with sublime, spooky atmospherics from chirping and droining analog keyboards while her guitar shreds through a spacey middle-ground of scorched blues and wound-up funk. The trippy, fuzzy marches and dark, almost dirgey electronica/rock of 09’s much-heralded Actor has made elegant surrealism her calling card, which she continues to carry on Strange Mercy. 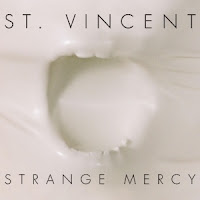 Her musical compositions can be as elaborate, heady and acerbic as her lyrics. She’s not going to be a “Cheerleader” anymore cuz that epitomizes society’s submissive, artificial grin masking life’s pains and the world’s complexities. Wind your body, wind your mind. Mercy toes the line between grand and grandiose, maybe too preoccupied with perfecting (or re-imagining) Actor’s aesthetic. Still very much it’s own unique trip: haunted, orchestral, rigid and rhythmic, but like a lot of “third” records it feels like a closing, the third act of the opening to her ouvre. It's no wonder this is turning heads, it's the show stopper...it brings the curtains down, bolstered particularly by the production work of her consistent collaborator, John Congleton. By the last track it feels like the stage is cleared.