However curious and/or heartening, Detroit is developing some substantial bonds to out-of-towner rock acts - with the recently girded camaraderie between Conspiracy of Owls' Robert Harlow to the Anaheim-CA-based Burger Records and the sporadic returns of up-and-coming scuffed psyche twangers Natural Child to fill bills with Detroit's resident punk crowd (i.e., among others, the balls-out brevity bashers in Kommie Kilpatrick, who recently put out a new tape via their drummer's label).

Through the mid-to-late 00's, perceptions swirled amongst touring bands that we were somewhat of an unattractive stop that was an otherwise out-of-the-way-swing interrupting an ideal route from Chicago-to-Cleveland-to-New-York only to have an underwhelming, under-attended show. 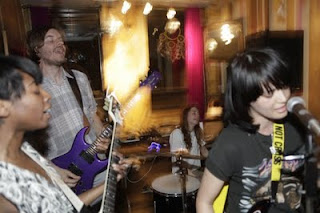 Comes a time when we need to network outside of our state, just as Harlow (who recently welcomed warped-soul/psyche-pop song slinger King Tuff to our town to lay down tracks for a forthcoming record), other bands like Gardens are putting things out on California labels.

In any case - on Thursday you can catch Harlow's fellow Burger-ite, Hunx & His Punx (imagine if John Waters was the Ramones' manager), at the Lager House. Ypsi/Arbor sinuous surf-tinged rock quartet Swimsuit opens up, along with the aforementioned Natural Child (who hail from Nashville) and noisy charms and clattery pop-rock of the Pizazz (another recent Burger addition).
Posted by jeff milo at 10:07 AM