September 24th, 1991 -
Back when album debuts were still tinged with a certain significance, garnering zealous claims of cultural impact, rising to or falling from the simmering of expectation and tied up with a swelling bake of hyperbolic sanctification...

Perhaps 2011's 17-year-old specimens are likely just getting the latest hot listen off of their mediafires or whatever-other-Internet back alley deals - But 20 years ago, this Saturday, it's mythologized that the torn-denimed, droopy-faced, long-haired, flannel-flanked masses completely lost their shit over the unveiling of this album... 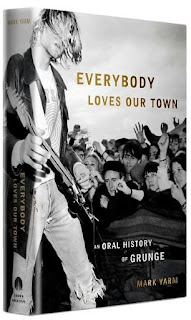 Here's some thoughts from a more sagely MusicHead, Lo-fi-Bri (of Carjack/Electric Fire Babies) who raised/trained himself to be a shrewd and passionate crate-diver, head-constantly-betwixt-headphones...giving us his perspective from back then...

"when Nirvana's 'Nevermind' so called 'dropped,' - I was living in Dayton OH," (a particularly formative year, musically, for Mr. Carjack...)

"and I picked up the Nevermind CD on it's release day.  Funny thing is - you couldn't find it in the stores!  Let alone did any of the record store clerks even know who Nirvana was...  I ended up making a bunch of phone calls and found it in another town at a store called CD Connection."

"I picked up 1 of there only-2 copies.  I can still remember the record store girl giving me a really weird look while ringing me up, looking at the naked baby on the cover!" ... "Weeks later, MTV invents the BUZZ CLIP video feature, Nirvana/Pearl Jam/Red Hot Chili Peppers all have videos featured and they all blow up in a matter of weeks!"

If you want to hear similar straight from the horse's mouth-type accounts, from around that era, ...  I'd recommend checking out this recently released Oral History of Grunge - Everybody Loves Our Town - by Mark Yarm.