The last time Christopher Tait had a music project outside of the Electric Six, he gave us a mellodious new-wave dashed ballad about "leaving..." and now, collaborating with NY-based songwriter Jesse Paris Smith (daughter of Patti), he's singing about trying to get "(Out of) The Neighborhood..."


It's a dazzling, space-pop strut; the punchy brass feels like the last humid hurrah of summer (just in time for this month's equinox). This song breaks out from the get go with an irresistably hand-clappable beat and sun-burst guitars strumming out their simple tinny purrs, while organs and pianos together ringing-round-the-rosey. Tait's vocals, marked with a mid-low charm somewhere between Costello and Richman, are complimented by Smith's airy back-ups, both lightly layered with a sheen of fuzz like a just-barely-tuned-in AM Pop station... 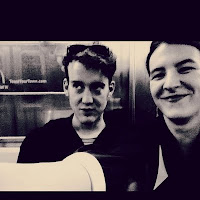 (E6's Zach Shipps produced these two ditties, with its B-Side diverging away from pop and into an ambient, autumanal, trippy traipse).

(Modern Music listeners likely heard this a few days ago). (You'll be able to find some hard copies in October.)
Posted by jeff milo at 3:30 PM