I've been dancing my way in and out of this subject's bonfire circle for the better half of the last year...

How niches destroyed culture - from Slate.com "We don't agree on anything the way we agreed about Prince, Nirvana and MJ -- and our cultural life is poorer for it"

Pardon the quick and dirty//get and go -nature of my lazily snipping another writer's work and merely giving you the link...but, then, I'm sure many feel they could use a break from my dissertations now and then... Though I might be moved to defend how much "poorer" we actually are...

That said, here's something for the indie-rockers on Friday - (New Dodge, in Hamtramck) 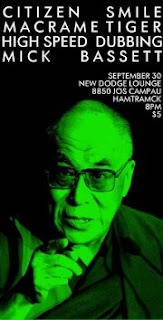 I'm sure the members of the bands packed into this bill (ranging from power pop, to spaced-out folk, to fuzzed-out psyche and then to whatever new trip Bassett's a-buskin' down...) can, perhaps, reveal the significance of putting the Dalai Lama on their humble lil internet-poster...

But I'll at least add some relevancy to it - spurred from a day job in a public library; His Holiness released a new memoir this week, The Profound Mind, discussing the potential to bring about positive change in the world. Many a review or blog have also clipped this exerpt: "Our efforts must be realistic. We must establish for ourselves that the methods we are following will bring about our desired results. We can’t merely rely on faith. It is essential that we scrutinize the path we intend to follow to establish clearly what is and what is not effective, so that the methods of our efforts may succeed..."

There's a release show on Saturday (10/1) ...also, again, at the New Dodge - featuring The Ashleys, Sharky & the Habit, Amby Gore & the Valentines and Bootsey X & the Lovemasters