Johnny Headband - "Over There"

A new single is out from local kineti-cut-up space-rock outfit Johnny Headband, a preview of their cabin-conjured LP, Who Cooks For You? (which will see the light of day some time in the early new year). 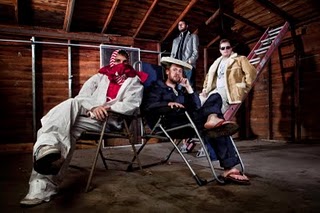 Stream: Johnny Headband - "Over There"

Radiating their characteristic surreal charm, "Over There's" video touches upon the main muse for Cooks, the rich redolence of the outdoors, the sublime, squinty meditations of sunrays stabbing through green leaves, wooden cabin shuffles, canoe transports, and gravelly shores.

As the Brothers Thompson nonchalantly half-dance their way around porches and the unmistakable "forest" of the Loving Touch pool hall, they seem to be spurred on by the squeaky incantations from their new wandering prophet, a wizardly-wrapped Speaker who knows how to rock a hammock.

Says singer/keyboardist Chad, “I wanted something that made you wanna move, and feel good, and go out into the sun and feel like things are possible. These songs, they’re visual. They’re all on sonic landscapes.”

Even the high ceilinged resonance of their cabin studio, the birds outside, the rusty creak of a door...became instruments on the album...