Happy 20th Birthday, Nevermind. Though, to be frank, I always liked In Utero better.

But still, unlike many MusicHeads out there, I'm not retracing my adolescent album steps back to overly reverent re-spinning's of the grungebreaking/groundbreaking album ~ (Do you wonder, as SPIN did, what Nirvana means to you?) 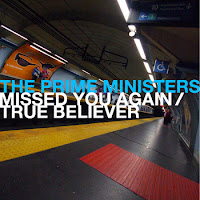 Instead,
I'm rockin a pair of strutting, new-wave-tinged pop-rock ditties by locals, The Prime Ministers, who, having just played the ever-charming and beer-splattered DIY Street Fair, recently put out a mini-digi-EP on their bandcamp.

"Missed You Again" puts funky falsettos and spacey, disco-glittered showers of synthesizers atop rock's meat-and-potato-plate of jangly guitars, booming bass and punchy percussion.
"True Believer" keeps the danceability flexing with tight, treading rhythms and a fiery, fuzzed guitar kicking and soaring under the chorus - sounding like a not-so-distant cousin to similar local shake-up-pop-stylists like Johnny Headband or the Electric Six.

But anyhow, back to that whole Nirvana-commemoration-thing...
This Saturday, at the Blind Pig (in Ann Arbor), there's a Nirvana Tribute Show - featuring:  Err..., Counter Cosby, Las Dragos, Sharky and the Habit, Mumble, and The Bobby Electric, along with new collaborations~~Dive (members of Red, White and Booze),
and Negative Creeps (featuring Chris Taylor from Blue Snaggletooth/Scott Morgan's Powertrane, Fred Thomas of City Center / Swimsuit and Dave Sharp from Mol Triffid/Dave Sharp Secret 7/ The Melvins).

So then, -Negative Creeps features Chris Taylor, who plays guitar in Ann Arbor based Blue Snaggletooth, who recently unearthed an album radiating with metal-tinged, psyche-scorched power-ballad potency. As Autumn sets on, they're essentially re-emphasizing their Summer release, Dimension Thule, bolstered now with it's recently-arrived proper album artwork) - while they simultaneously gear up for next month's YpsiFest (playing Oct 14th, in the middle of the Woodruff-hosted 4-day-long 39-band-packed event). 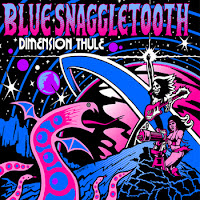 "Swords of Atlantis" comes crashing in on a wave of tumbling, tension-building drums before dualing guitars ignite with grimacing, rickety riffs under throaty, anthemic lyrics regaling the "...time of the Old Ones," back when the "Earth was shrouded in fear..." The aggressive rip and roar of these guitars compliment the mythical murk and cosmic conjurings of the album's over-arching aesthetic, plenty of freaky fuzz and rust-flaked fire spew and swirl over broodishly propulsive blues-wrung grooves.

It's not all psyche-pummeled space-rock though, there's sublte twangs of gothic-country, howled-out indulgences of post-grunge grit, cathartic spills of blues riffs, and of course, plenty of pedals echoin' and alterin' the six string surge.