Two of the most eclectic sounding bands of the last five years are joining their exquisite forces for a dual-release party this Friday night at Elijah's in Hamtramck.

Characteristics, with their nightmare-chic post-techno punk...
& White Bee, with their blend of a rock beat under funk chords and soulful vocals...
Each have a new set of material (both releasing via cassette)

Characteristics Synthaside and White Bee's 5 'Til The Time 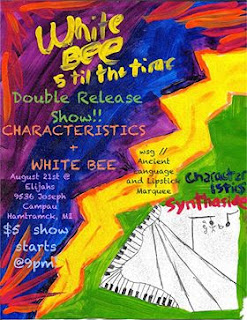 Like Suicide of the 70's or Detroit's own Marco Polio & The New Vaccines, the inventive, dissonance-loving minds behind Characteristics are gracefully welding a hypnotic arrangement of beats, sometimes just cerebral head-nods and body sways, other times accelerated into rave-tempos, onto a blinding (or is it ear-bending) girder of caustic noise and shifted feedback. But it isn't merely some esoteric hell-raising racket, it's an enlivening, bracing form of punk, albeit fused imperatively to the synthesizer. I love how the vocals sound like they're truly trying to shout into to your ear over the splendid ruckus, as if the vocalist were right beside you, yelling over the amps. Listen closely, though, and you'll hear it...they're often keen to suture a sweet melody underneath and throughout the fuzz. 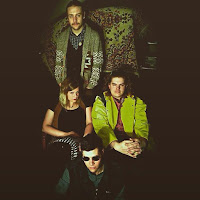 White Bee, meanwhile, are on the entire other side of the spectrum; demonstrating a fine sense for space in their compositions for their sublime range of tones to breath, from the breezy bristle of that funky guitars, to the energizing splash of those cymbals over the snapping snares, to the understated swagger and slap of the bass to shining, soulfully trembled wail and trilling croon of those lead vocals. There's the warming, major key syrup of R&B as well as the more angular kartwheels of indie-rock through the riffs and rhythms; I sense their aiming for something that warms the heart yet also moves the feet...something more energized than your usual grooviness, a blend of psychedelia and soul.
Get there, get the tape, and enjoy a track like "Casper Car;" bob-n-weave rhythms set to Sea & Cake-recalling guitars and a percolation of what sound like synthesized steel-drums at the periphery.