Are You Leaving Everyone? An Interview with Sros Lords 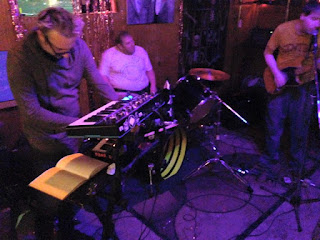 The spectators stand amongst the tables in front of the stage area at Kelly's Bar in Hamtramck. Morgan Blank, guitarist and vocalist of Sros Lords, arcs over his maple-bodied, Fender Mustang Deluxe,  a multitude of pedals at his feet. His gaze is pensive; each strum is a fuzzing echo. To his left is Johnny Lazer with his synthesizer amalgamating the D&D-punk-world of the Detroit trio’s signature sound with that of the watchful audience.

A drum kit stands unattended between the two Lords. This is the end of the set, and they are playing "Doom Dragon," a song about Gods, destruction, and Blank's mythological, Santa Claus "The Confessor." Drummer, Jamie Cherry, shirtless and with chin raised, walks righteously to the back of the bar. He is a warrior and this eve, he has played hard.

The congregation is understandably slack jawed as they are a part of the unholy Sros Lords odyssey. When Cherry reaches the stage, he stands before Blank—and speaks their sooth: "Be gone dragon! For though you may tempt me to battle, I would lose far more just by saying your name!" The Sros Lords' live performance is a time of frenzy and an occasion to raise the sacred "horns."

Sros Lords' debut album, Are You Leaving Everyone?, is being distributed by the black metal, London label and artists' collective, Merdumgiriz. Emir Togrul, label founder, will mail you a Sros Lords' cassette or CD; each one handcrafted with a unique design, fitting for an album Togrul calls, "a highly original slab of melodic heaviness and insanity..."

The band's exceptionalism is what motivates me to write this article. The energy they exude begets creativity. Listening to Are You Leaving Everyone? feels like riding in a car with a reckless driver. You know it's wrong not to care about the speed you are traveling, because it's dangerous, but you feel so alive when you succumb to the wildness of the ride.

The Sros Lords play ancient punk of the future. The guitar is the bass; menacing chord progressions are a bed for Blank's primeval lyrics. The songs on Sros Lords' Are You LeavingEveryone?, recorded by Sros and Cait Ash in 2015, are about the paradigms of love, madness, and mortality. All the while, Blank's poetic language is self-aware. His vocals are erosive and cool (to be plain.) The synthesizer often lies on top of the guitar and forges a heavy metal edge. Sometimes, though, the synth clarifies and cuts through the immensity of it all—through the big guitar, the elegiac vocals, and the blitzkrieg of Cherry's drumming. The drums drive relentlessly. They pound and drill, like road construction. The high-hat sizzles. Beer belches dot the recording. The songs are about life's oldest meditations, while being youthful anthems you can dance to. 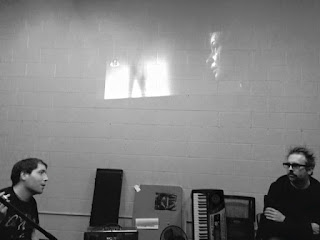 I arrive at the Sros Lords' fourth-floor practice space, at the Russell Industrial Center, to speak with them about the new distribution of their album. When I enter their space, Jamie Cherry puts on a green cape and Johnny Lazer projects a black and white film, called Robot Monster, unto the wall. Morgan Blank immediately gifts me a 32 ounce Miller High Life: "The Champagne of Beers," as well as a copy of Zenophon: The Persian Expedition, a book about the Greeks confronting the "barbarian" world and Zenophon's epic march into the heart of Persia. Here is the enthusiasm of Cherry, whose catch phrase is "Get wild!;" the stoic, edge of Lazer, dressed in all black with his hair on end; and the philosophic Blank, witty with pipe in hand. 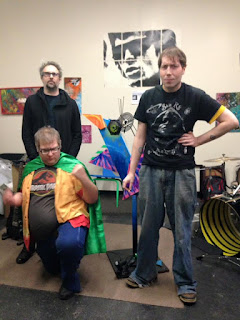 Cherry says that the inception of Sros Lords, in 2010 A.D., "felt like fate." Blank and Cherry met at "Bagley Vision" at 14th and Bagley, where Cherry started playing drums "…because they were there." Johnny Lazer, previously of sludgy-synthesizer punk band, Human Eye, recently replaced local sound engineer, Cait Ash, on sythesizer.

One of Sros Lords' earliest sets was played to a large audience, as winners of a contest to play with well-known, Japanese punk band, Peelander Z.  "People liked it," Blank said, downplaying it. "Live performance is my favorite newness." While the Peelander Z show was in Pontiac, Blank says the Sros Lords "like playing Hamtramck...because the spaces seem to fit the crowds."

Cherry, full of zeal, says, "You see us live and it's like you went to another planet...We are bringing our fantasy world to you, live."

According to Cherry, live performances should have the audience wondering, "...am I gonna get my throat slashed? Is somebody gonna run out in the crowd? Is somebody gonna throw a beer bottle?" As he asks these questions, he suddenly takes apart the drum seat he was sitting on and throws it. He flails around the room.

Lazer, who Blank calls "a notoriously lovable guy," doesn't say a word, and Blank unblinkingly returns the conversation to the subject of Hamtramck: "The Poles are one of the reasons the Detroit music scene is so good...The polka was a pretty good beat, back in its day." Suddenly, Cherry is wearing a wizard's hat, saying: "When I drum, I want to put on a fucking show. I want people to say that I'm a one-trick-pony and my one trick is getting fucking crazy!" 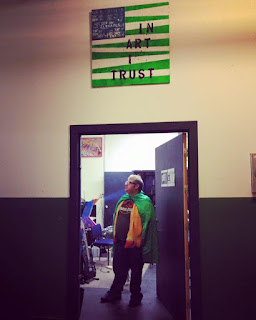 I ask about "Erica," the big, euphoric song about love on Are You Leaving Everyone? On the recording, Blank sings: "Wild desert stallions pound the Earth and shake the ground / but they don't shake Erica.../ The sun it spins and radiates / but every planet gravitates in a ring around Erica.../ Distant mystic wizards whisper sooth / and curse the birth of the one called Erica." The drums recall the trampling of the horses in the lyrics and they clang and shine like the song's "sun." The vocals are made of yells and mewls. Cherry reveals that the ‘Erica’ was one of the first two songs that he and Morgan ever jammed to. Meanwhile, Blank says he thinks it’s “…the best song I've written in my life and I'm happy for that." He wrote the melody and the words, strewn with heroic imagery, while at a job washing dishes. "There's good reverb in the back of a dish tank." The song is about a girl he knew who believed in love and who he wanted to honor because of that.

Killer bees, mutant armies, corpses, fires, guns, and baby chicks: there is a catalogue of images on Are You Leaving Everyone? Blank explains, "At one point I realized I should stop writing literally because it's hard to take me literally." Most of the metaphors Blanks draws during our interview are from medieval texts and Greek history. "I consider now a degenerative state of empire," he says, when I, as the interviewer, wonder about some bands in the Detroit scene who seem to be overly-derivative. Blank launches a lengthy metaphor between art today and in the time of the Romans. Essentially, he says, bands should "look at the heart of the ritual rather than: ‘Oh, we should all wear matching suits!’"

The talk about genre has me wondering: ‘Why do the Sros Lords produce punk?’ Blank enlightens me: "I like punk and I've always been into it. It's easier to play and sing to. God bless metal, but I'm not gonna finger tap on a Mustang." Blank also says that his number one, rock 'n' roll fantasy is to "buy a new guitar." But if the Mustang is the magic guitar he uses to conjure the epic punk of the Sros Lords, may he never play another.

Sros Lords' Are You Leaving Everyone? is available through Merdumgiriz
Sros Lords on Facebook


Sros Lords' next performance is Saturday, December 10 at the Painted Lady in Hamtramck


Ed. It's not often that a writer besides myself, but I always welcome it. You can find more articles by Macleod here