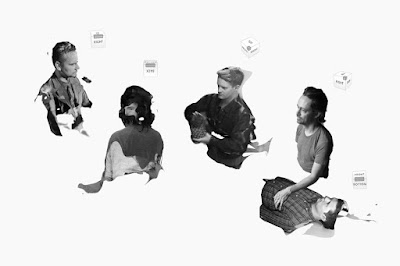 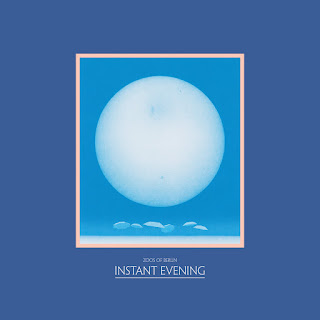 ....Because I feel I’d be debasing the objet d'art that’s been sonically sculpted inside their Zoodio in midtown Detroit by crudely pasting a decoupage of derivative genre classifications upon a slipshod essay’s encompassing appraisal of these 12 new songs (via Don’t Look About).

I’m well aware it might not be your thing but I also don’t want to prematurely provoke your anticipations or assure your own forthcoming personal applauses of it by justifications that it sounds like__ or it sounds like __. I also don’t want to lump Zoos into another section of specimens where I deem THIS album, Nov 18th’s Instant Evening, as: the record they’ve been trying to make all along… Or, …the culmination of everything they’ve tried before, the full realization of every facet of previous works forged into a comprehensive collage.

I also, at the same time, don’t want Zoos of Berlin to merely be precious.

I want the five creatures (with guitarist Matt Howard) released into the wild, free range, able to feel the raindrops and get a suntan, able to forage off of something raw or just sleep under the stars in the open air… I want Zoos of Berlin to wander out from their refuge and make their way into the city, I want taxi cab drivers to rear to a halt and gawk as they prattle across the rough cement sidewalks, I want neon marquee theatre lights spilling down on them to illuminate their studio-shadowed faces with a certain scrutiny. I want their album in a record store where someone can pick it up free of any knowledge of their backstory…free from the weight that I feel when I try to capture the specific significance of this band’s latest album…

It was around 2012 when I felt just as though I’d hugged Zoos of Berlin goodbye on the shores of Rivendell before the band as an entity would sail off to the Undying Lands. Their producer and engineer, Collin Dupuis was (and continues to be) busier than ever, their keyboardist Will Yates was moving to Washington D.C., their bassist and vocalist Daniel I. Clark was to be welcoming his third child at that point and guitarist/vocalist Trevor Naud was also moving away to… I can’t even-remember-where-because-I-was-too-distraught-at-the-time-because-I-worried-we-were-losing-an-all-too-vital-band…from the Detroit music scene.

Little did I know then, naive as I was, that they had the fullest of intentions to continue returning to the Zoodio to continue their careful crafting...

Is it too late to be getting to the point that you can see Zoos of Berlin for about 11 minutes on Friday night at El Club? 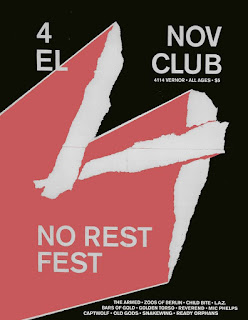 You can digitally obtain Instant Evening on Nov 18th,  with a physical release set for December 1st

You can’t dance intimately with someone to a Zoos of Berlin song like “Ambition Sounds,” ...but then again, you almost could. The song is a smorgasbord of funky bass lines, caustic guitar drones, cheery synth-pop effluences, carefully-reverb-coated vocal crooning fused together an uncanny harmonies, toe tapping percussion and nonchalant-chic post-rock guitar riffs… All of it perfectly balanced in the aural mix; ideal for headphone swoons.

“Rush at the Bond” kicks off with urgency and yet these celestial chimes from the synthesizer in its opening measures and these ultraviolet sunburst guitar growls through the bridge offset the otherwise aerobic rock vigor with this signature dreamlike ambiance that they’ve meticulously crafted over their 10 years together.

When I hear a song like “Constitution,” though, I am once again resisting the urge to hyperbolically hang that “this is the sound they’ve been reaching for all along” plaque upon the final product. That the percussive elements could be so frenetic and spurring, the synthesizers reaching energizing velocities at the chorus, while the vocals, these finespun harmonies, drape in as though almost from another song entirely with a lilted, falling-scarf grace that gives optimal embossing to the vibrato intonations.

A Zoos song like “Constitution,” or even “White Cloud,” (or even “Glen Riders”) finds one wanting to cartwheel down the hill in this in-love-with-live frenzy and yet also to stop to fall cross-legged to smell the patchy soil’s cache of tulips at the same time. A Zoos song is elemental like that, a meld of myriad energies you’d find in the air, the electricity of everyday life, the noise of existence as it were, of sublime reverie, to carefree cavorting, to haunted contemplation, to stopped-in-your-tracks marvels. Something that would fit in a theatre with red velvet curtains, or in a modest club’s dimmed ambiance and glass-clinked barside cacophony.

I’ll never know what to tell you about a Zoos of Berlin album. Just that there are breathtaking moments like the opening of “Evelyn,” that there are earworm melodies of bittersweet minor keys like “North Star On The Hill,” or that there are almost country-rock twangs under poetic lyrics like “A Clock Would Never Tell…” And if I go on any longer trying to capture with words what should be made evident upon listening, then I’ll drown in empty adjectives.

It’s mood music for an evocation you haven’t allocated yet, a poignancy that won’t be placed outside of the preferable frame of the artists chosen lyrics, time signatures and melodic phrasings…  You’ll always have a hard time describing JUST WHAT IT IS about that one dream you had last night. So it goes with Instant Evening.

For more on the backstory of Zoos, click here
Zoos of Berlin
BandcampFacebook