Calling All Believers: An Interview with His Name Is Alive (Primarily About Science)

There is tenderness and torrent in the new songs of His Name Is Alive; there is sacredness and lots of shredding! The vocals and atmospheric auxiliary effects evoke their signature mysticism, while the bass, drums and guitars are such ferocious agents of propulsion, enough to cast half a continent upwards into the cosmos. The gliding and circuitous roar of the guitars are vivifying, the drums are dynamic defibrillators, the more furious of crescendos could quake mountains but then it always finds a path toward paring the musical clamor back to the sweet melodic swoon of singer Andrea Morici, while the dissonant divinations from those strings settle into more of a 70's blues-psych riff ride...

But when I contacted His Name Is Alive chieftain Warren Defever, he wound up sharing much more about physics, God and the scientific process, rather than the esoteric charms of the creative process. 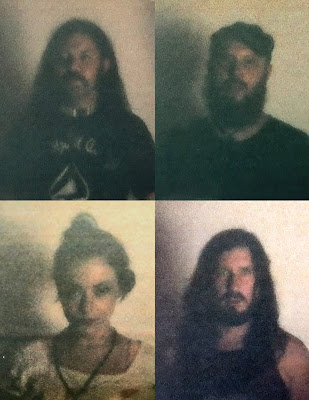 The Guitar Solos and Dark Energy


You see..., there are some spellbinding solos on this album; it's like jazz-metal. The shape and manner of this album is cavernous, its radiance roams, expands, protrudes... The "light" fills any hollow with force. And, while I tried to ask a straight forward question about whether this was a "rock album...," I wound up triggering a much more thought-provoking response from Mr. Defever...

"One of the themes on Patterns of Light is energy acceleration," said Defever. "I've been studying particle physics and the thing about Large Hadron Colliders is that they require a lot of energy to produce these high speed collisions of particles. So, if the music is going to explore that, then we need to figure out what is energy in recorded music... How do people interpret energy in sound and how to push the limits of what came before...?

Defever posited that musicians playing in an intimate space can capture an energy. For the quartet behind Patterns of Light, that space was a 10' x 10' room with no enclosures and no acoustic baffles on the walls and the amps pointed directly at the drums without any player wearing headphones. That creates an energy... "...a distinctly different energy  than a computer nerd programming a sequencer and then adding all the parts one at a time," said Defever.

And then he tells me about the scientist, the one that consulted the band on all of these explorations of physics. This scientist would provide notes on the recording process, "...undetectable particles flew out, (and) sometimes these are neutrinos..." And, said Defever, if they saw some weird spike in the missing energy plot, then it could very well be "dark energy" and that means "...you gotta get serious about energy flow awareness!"

"For our purposes," he said, "the guitar solo represented an expression of energy, a quick way to demonstrate the divine order of all things and a means to convey how nature works according to mysterious universal precepts. When the scientist challenged us to meet him at the experimental science meets experimental music performance event, we knew we were unprepared and had to really come together to fully utilize our resources. Studying the fundamental principals of matter led me to a couple unexpected places, creation myths and St Hildegard of Bingen's visionary theology..."

His Name Is Alive

This is the third time I've interviewed Warren Defever and the prior two presented sets of questions to the local avant-renaissance/art-rock provocateur that were preoccupied with this aura of mystique behind the band..., or, belaboring his process and his mindset and his mystery, yadda yadda...

I wanted to know more about the players helping produce the energy flow of Patterns of Light...

Andrea Morici:
"I met (singer Andrea Morici) in 2005 on my 35th birthday," said Defever. "Her and Ian from the Piranhas came over and sang a bunch of Elvis and Patsy Cline songs. I had seen her play organ in the bands Sonapanic (with Matt Luke) and Izquiardo,  plus I had seen her do a whip performance with Jimbo Easter and maybe Tim Lampinen... (I can't remember exactly, but there were definitely some punk weirdos around.) She seemed tough enough to handle any ridiculous request I could throw at her and her tone was mellow and sweet, sorta halfway between Karen Carpenter and Anne Murray. We've been working together for about ten years now!"

Dusty Jones:
"(Guitarist) Dusty Jones was playing bass in the Infinity People right at the end of that band, he needed a job so I hired him to work in my office: ...paperwork mostly. He's probably the best guitar player I've ever seen in real life. I keep expecting to get a phone call from him saying he just got hired to replace Ritchie Blackmore in Deep Purple or that he got a gig with Ozzy playing all Randy Rhoads' old parts."

J. Rowe
"(Drummer) J. Rowe played in a lot of great bands before I met him (like This Robot Kills, Bulldog, Bluesong) and we started playing together on and off about seven years ago when Dion Fischer brought him into the Infinity People. He plays drums, but also bass, guitar and vibraphone. He's got great production ideas and knows when and when not to put phaser on the whole mix. His other band Westerbur and Rowe are putting out some of the most intense jams on a series of albums that only contain side long songs. He can play louder than anyone and, even wearing flipflops, he can match the volume levels of my 1974 SoundCity full stack and Dusty's old Marshall Super Lead but then turn around go all brushes or gong lightly when we do a meditation jam at the temple. Also he was the first guy in Detroit to have a beard.


nobody is gonna fuck with you..., seriously.

Because I always, like a bumper car with a broken steering wheel, veer these interviews into existential queries blindly excavating the "essence" or "character" of the band, I, deservedly, got a doozy of a reply...

"Some bands are looking for fame or fortune or have integrity or want to speak for their community or some bands just want to write that one song that, years later, will inspire a Twitter account named The Boys Are Back @intownagain, appropriately enough located at Dino's Bar and Grill, that only tweets one line of "The Boys Are Back In Town" by Thin Lizzy at a time. As a group, we started working on the rock opera Tecuciztecatl shortly after The Infinity People released the 2xLP concept album In Love With The Light.........

".....We wrote the songs together and conceptualized the plot points (of Tecuciztecatl) and developed the characters for the rock opera as a group. Most of the characters personalities, back stories and dialog came from people we knew. I've been lucky to play with some really great drummers in this band: Damian Lang (Elvis Hitler, Goober and the Peas, Detroit Cobras), Steve Nistor (Iron and Wine, Emmy Lou Harris, Daniel Lanois), Deb Agoli (Outrageous Cherry, Viv Akauldren), Trey Many (Pedro The Lion, Starflyer 59), Miggy Littleton (Ida, White Magic) and more, there's so many... sorry.... I got distracted. Seriously though if you got J Rowe and Dusty on your team, nobody is gonna fuck with you..., seriously."


That thing that I perceive as a certain "aura..." (Or: more on "Invisible Seers")

I often get this sense of the sacred when i hear HNIA songs. "Reflect Yourself!" "Calling All Believers!" They're like songs that could help you find a new way to look at yourself or maybe even the world. They are big songs inside a normal sized recording shell. They're cosmic, but right on your CD-R... There was also all of this sort of inner-circle-y/cult-y/rallying-of-the-faithful of those outside the mainstream... A call to join a healthy weirding-out for our collective souls...

And Defever responded...with physics. "The search for dark matter and dark energy easily connects to black metal in my mind."

"The idea of the world's leading scientists working around the clock using the most advanced technology available on the planet devoting their lives to this search for this 'dark energy,' this dark thing that makes up 68 percent of the what exists (dark matter is 27 percent and regular matter is 5 percent), ...this dark energy that accelerates the expansion of the universe... is an inspiration! The scientist, Dr. James Beachem at CERN is one of these believers, these invisible-seers. It is a sacred calling. The devotion to this singular goal of understanding how the universe works and the basis of its creation is a powerful source of inspiration.  I guess its hard to talk about but it seems important, maybe more now than ever."


And then I asked for the deeper meaning behind the title; the overarching theme:

"Patterns of Light is one of the formats that God uses in communications with people, according to some religious beliefs. Secondly, Albert Einstein's Nobel Prize in 1921 came from his formula explaining wave-particle duality: that's photons behaving both as a particle or a wave depending on the frequency, which when diagrammed appear as patterns of light.  The third idea behind the album title comes from some of the event displays that the scientist sent us to study; the event displays capture the patterns of the particle collisions and are often very beautiful renderings. 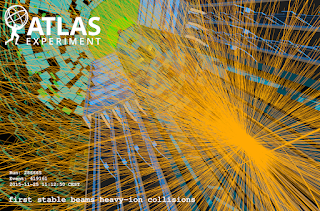 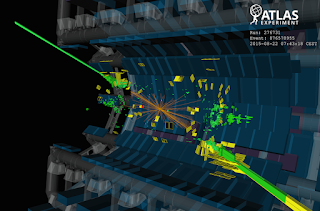 There you have it, readers; my third interview with Warren Defever of His Name Is Alive!

If you count up all of the merch, all the artifacts, the CDs, the cassettes, the singles, the limited edition's, all of it... then Defever has tallied Patterns to be HNIA's 100th release!!!