Zander Michigan has started to make a name for himself locally. And with his new album, he’s made a town for himself as well. Yes, the singer/songwriter otherwise known as Zander Melidis realized that his musical moniker already sounded like a place you could find on the map of our mitten-shaped state, so why not register his own zip code?

Next Saturday, Zander Michigan releases his third album, 48108, thirteen songs of his signature folk-rock style, swelling with heart and heavy poetry, and sporadically sparked by a good handful of high-energy ballads.

Every instrument you hear on 48108 was performed by Melidis; sometimes pared back to a quieting ode of acoustic guitar and harmonica, other times firing from every cylinder with a drum kit, guitar and bass. The lyrics can go from a narrow focused introspection to a worry-tossing celebratory romp, from here-and-now heart-torn takeaways to a more existential search that slips beyond the surly bonds of Earth into bigger-picture-looks at life, itself. The poetry and the emotional intonation bent upon the notes have both considerably evolved over the last 3+ years of Zander’s steadily established foothold amid the greater Detroit area music scene.

You can hear the whole thing now….

But next Saturday, Melidis is throwing an album release party for 48018 at The Loving Touch. Redford-based Cave Radio will be doing a live stream of each performance, along with interviews of bands between sets. Also, local K-9 shelter/intervention/enrichment nonprofit Bark Nation will benefit from a portion of ticket sales, with volunteers setting up a table at the show with information about what they do for dogs in need.

Zander is backed up by Greg Blucher on lead guitar, Johnny Albert Abel on bass and Doug Austin on drums. The exceptional lineup opening up the show features Port Huron’s rock ‘n’ roll phenoms The Gasoline Gypsies, the evocative indie-folk of Anthony Retka’s Big Parade and the trouncing blues-rock storms of The Messenger Birds.

I know Zander would have liked me to get all of that out of the way first, before I go on with the interview… that’s part of his charm. This party isn’t so much about him, he told me, as it is an opportunity to celebrate four unique and hard-working local bands that shine amid their own genres, and for you, the live music fan to “have your life changed, if only in a small way…” 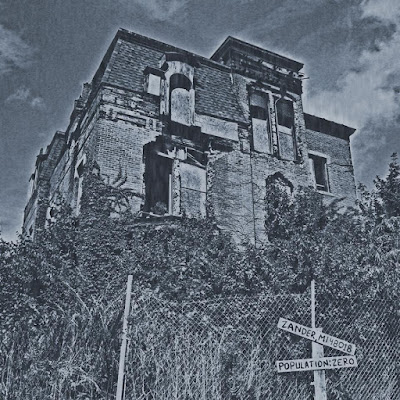 Zander’s been playing in bands since he was in high school. He was at that ideal “coming of age” point in his life when The Strokes put out Is This It, and it opened up his eyes to the potential of getting some grit onto bluesy melodies and swaggering a bit of brashness onto the rock ‘n’ roll stage. Even though his first two years on the scene found Zander as a bit of a reverent replica of Bob Dylan, he actually didn’t discover Robert Zimmerman’s Nobel-quality lyricism until later in life, not until he was in college. This was 2012, and that's just when Zander began penning his first proper folk songs.

But Dylan, just like the Strokes, showed Zander that you could draw from a few iconic and unmistakable genre points like folk, punk, or rock, and just bend the notes like a careful craftsman until they fit your natural model. (Speaking of a craft, we should point out that Zander graduated U-M with an engineering degree and now works at Ford… but let’s get back to the music).

Zander really found his voice on 2015’s Zander The Great and it’s continuing to be evident with 48018, audibly throwing his whole voice, with that distinctly rustbelt rasp, into every emotion of any song’s specific story. The lyrics are poetically vague enough to where anyone could relate, but ask him after the show about a certain cut and he’ll tell you the whole story. The town inside 48018 has a lot of stories to tell; a lot of characters to be memorialized; a lot of heartaches to heal… and even some ideological axes to grind. What’s apparent is that the dude pours his whole soul into the words, the music and the recordings; to the point where you kinda feel like you already know this guy even if you haven’t met him yet…

But enough about all that… let’s talk

You’ve been at this for a handful of years now. You’ve released your own albums. You’ve even toured to England at this point!  So what have you learned on the journey so far? What’s been some of your takeaways?
The biggest takeaway, as a musician, is just not to take anything too personally. And, you need some experience before you can actually learn that. But of course, the music industry is a tough industry to try to make your way in, now more than ever. Everyone’s got their own lives, their own agendas, their own things going on, so you have to consider everyone’s perspective, where they’re at and not get upset if anyone doesn’t follow through on anything. So, you gotta know that might happen and instead just keep focusing on what you can do and what you’re able to do. I’m just focused on being a better musician….

And how do you see yourself? People may hear some of your songs and think it fits into folk… But it can also fit into rock, sometimes, or even some indie-pop…
I just want to become an artist and don’t necessarily want to be pigeonholed into any one genre. As a ‘folk singer’ I think that offers me a flexibility to be “a solo artist” but also follow any path that I choose. I love rock music, and even some pop stuff. I would love to be able to do that more regularly, but I just don’t have the opportunity enough…yet. But, yeah, I don’t think ‘folk singer’ would 100% represent who I am or what I want to be quite yet. I always want to try something new and change up genres.

So when you write a song, are you conscious of what your intentions are, or what you hope that art can…ya know, ‘achieve…’ in terms of engaging a listener?
I think it’s good for a musician to write how they’re feeling, but also make it relatable to anyone, so that they can connect to how you’re feeling, even if indirectly. It doesn’t have to be overt in the message or in the lyrics of the song. For me, when I’m writing… I mean, I’ll write everywhere. I use voice memo and notepad on my phone and I sing melodies into my phone… Never while driving, of course. I don’t necessarily have a desire to just make cool guitar sounds. I use a guitar, I know how to play a guitar, I can touch a pedal and get fuzzy, but I don’t depend on it. For me, it’s all about the lyrics and the message and the creation of the whole art of it, from the music, to the album cover, to the photographs.

Those are the kinds of things that connect with listeners…
It’s all about connecting, for me. And showing this personal side of myself. It’s a way, sort of, to get out my own demons. But to have someone come up and say that a certain song really meant something to them, that’s what matters to me.

You showed this when you went to England with a star-spangled-banner-blazer on…, that you have this sort of ice-breaking sense of humor or theatrical/charismatic way of presenting yourself. It goes against that vein of some DIY/indie-rocking/and-sometimes-Detroit-area musicians who kinda carry themselves as though they’re, ya know, ‘too cool…’
I hope I’m not cool! I would never try to be… That defeats the purpose of trying to engage a listener or an audience. It’s through this little bit of self-deprication, a little poke here or there; I don’t want to be offensive or vulgar, I find that off-putting. But I consider myself a very family friendly kind of musician. I try to be respectful of everyone; I do have that sort of campy sense of humor that can get across to everybody. Maybe a bit of vaudeville too, I love it. It’s how I’ve always been and it’s just translated into being a better dressed/semi-more-mature version of myself.

And 48018 –with inventing your own town by registering your own zip code. And the name: Zander Michigan. This place, your home, it’s clearly important to you…
It keeps me grounded. It’s made me respectful of the concept of home—as a place to hang your hat. And I’m kind of a homebody; I have a great, close relationship here with my family. My first record had songs about Michigan, but 48018 really is a Michigan album. I’m Zander Michigan; I’m born and raised. How can you take that away? I won’t let you take it away. I don’t think even if I were to move somewhere else for a period of time that that would change: I’m still a Michigander… Zander-Michigander.

You’ll find zip-code themed t-shirts that you could personalize for yourself at Zander’s merch table next Saturday. Or, if you can’t make it, tune into Cave Radio to stream it…
For more information, follow Zander on Facebook, or listen via soundcloud