This is also an excellent opportunity to throw yet an extra spotlight up toward the thrumming music scene of Flint, an hour north of the realms where I'm usually writing about, i.e. Detroit. Goldblum are part of an exceptional lineup for this year's 2nd annual Vehicle City Fest -featuring Braidedveins, City Mouse, The Penske File, and MORE!

Goldblum has been together for three years. The band's drummer, Joseph Allsop, is a long time friend of Solis (who also performs as a solo singer/songwriter). Solis said that Allsop has been one of the biggest influences in regards to his own songwriting over the years, and meanwhile, the pair have played in many bands together over the years. 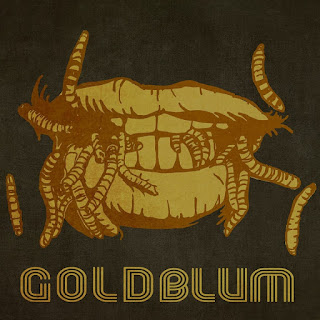 Vehicle City Fest goes on June 16th - 18th, in downtown Flint; an expansive and voluminous celebration of the history of the DIY punk community in Flint. The festival raises funds for children affected by the lead contamination, benefiting the Flint Child Health and Development Fund established by the Community Foundation of Greater Flint

Allsop and Solis had been in another band that steadily wound down into hibernation, (called 1876). But when Allsop told his friend he was eager to try something new and get back behind the drums, then it steadily came together, with bassist Marc Loiselle and lead guitarist Rick Coughlin.

"We still wanted to add to our sound beyond what your common rock arsenal puts forth (guitar, lead guitar, bass guitar, drums) so we invited our friend John Michael to come over and play whichever instrument we thought we could add to the songs," Solis said. "As of now, he plays keys that emulate an organ and it rounds out our sound pretty well I think." 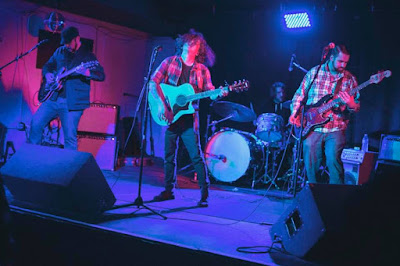 Solis grew up playing bass in bands, setting in a foundation for all his future songwriting that would assure a solid backbone/rhythm. He started writing his own songs on acoustic guitar and teaching himself to sing, but admits that it was a rough road, starting out. "Not that I believe myself to be a great singer now, but definitely better than when I first started," he said. "I was trying to emulate my favorite acts at the time. Think At The Drive-In and Portugal. the Man, Cursive and Bright Eyes. It was weird but makes me laugh now. I eventually buckled down and focused most of my energy towards writing songs by myself on acoustic guitar and finding my own voice. I took a break from this when I was 25 to focus on a hardcore punk act and after a couple years of that, I kept my head down on songs that would become Goldblum songs."

And there's definitely punk in Goldblum's DNA. But Solis thinks that what distinguishes their new sound is that he's now had proper time to really study how to arrange a substantive rock song I can be proud of. I've had a lot of time to find out what doesn't work for a song. "As much as I wish I would have embarked on this project years before it began, I'm glad it took me this long to get here," Solis said. "These are songs I'm excited about and with the musicians I get to do this with in Goldblum, you can hear the life in them as everyone does their part."

What I personally dig about Golblum is their balance of emotion and aggression - with these poetic/pop confessions or commentaries gliding over this churning rock drive!

Solis said that what he responds to most, with songwriting, is its storytelling aspect; the power to endear a listener to the emotions and sentiments sung in verse. "Artists like Johnny Cash, Bob Dylan, Conor Oberst, Tim Kasher, Eels, Ray LaMontagne, Ryan Adams, these guys are great at painting a perfect picture! However, I'm also a sucker for pop music. I love catchy choruses and verses that are easy for a listener to relate to. I try to push these through in my songwriting."

Lead guitarist Rick Coughlin: "...when I met Joe, he was engineering at Brandon Wiard's studio at the Orchard, after he left his Ann Arbor digs.  He recorded a single for the band I played in then, called The Afternoon Round, which to this day, is one of my favorite recordings from TAR. Joe was also fronting his own alt-country band on guitar and songwriting at the time with his band The Dirty Dives and TAR ended up doing The Dirty Dives' album release party, you know, so Joe and I were both playing in these sort of drunken Son-Volt, Wilco, Ryan Adams-esqe bands at the same time.!"

And Coughlin had his own insight as to what sets Goldblum apart...
"So, there's this post-hardcore-punk aesthetic to (Solis)' vocals and writing approach which is kind of hard to explain, but it reminds me of Bright Eyes/Connor Oberst stuff, but heavy in a way," Coughlin said. "I think that grew out of their years in 1876. I think we initially started out with a different songwriting style that was a bit more indie early on and more informed by those 1876 years, but as we've grown our sound over the last two years and added John Michael on electric B3 organ, the sound has morphed into this more classic sounding thing, and it's great, but it's really sad bastard music, which collectively we all love.  Like, it's our common thread I guess.  Although, I don't think Marc, our bass player is really into listening to those styles of music as he digs the heavier side of things, but we're slowly converting him into a sad bastard music lover too!!" 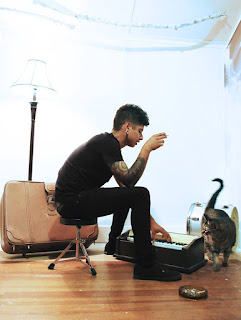 Solis said he feels very lucky to work with the guys in Goldblum. "These guys push me to try to write the best songs I can write for whatever it is that I'm trying to say. I want them to be proud of the songs they're playing to but I feel like to a certain degree they feel a similar way in regards to presenting their parts to the song; they want me to be proud of them as well. We pretty much want to get the most out of a song because ultimately we want to play songs that we enjoy hearing over and over again. I think one thing that makes it so much fun is everyone is able to play a different instrument besides the one they play in the band. So we can all experiment or lend a hand to whichever instrument might be having a hard time coming up with a part. This helps us out so much when we're trying to create our vision for a song.  At the end of the day these are some of my best friends, doing what I love most with the best people I know is super rewarding."

Goldblum are working on an album with Jim Roll over at Backseat Productions this summer. Besides Vehicle Cit Fest, they'll perform an acoustic set on June 4th at the neighborhood Porch Show (North Washington), and then June 30th at Mac's Bar in Lansing.