Nolan The Ninja's YEN and the Art of Hip-Hop 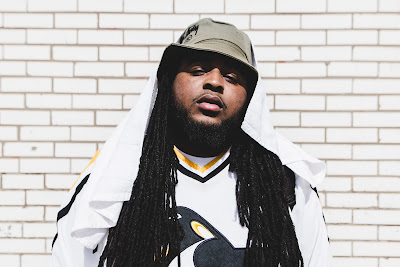 Nolan The Ninja is a rapper of pure adrenaline. His voice, his body, his beats, they are all fully flexed, full of fire, and all of it, especially the lyrics, hit hard. But Nolan Chapman, the 25-year-old livewire emcee otherwise known as Nolan The Ninja, is utterly focused, driven, and by now, ever more worldly in his overall approach the a stage, or to a studio. And if this local rapper/producer is markedly intense, it’s only a means to bring a beneficial invigoration to his audience. At the end of the day, this self-ascribed “hip-hop nerd” just wants to be as inspiring to this (and future) generation(s) of hip-hop fans as several icons of the 90’s were for him when he was growing up.

This September, Chapman releases his second full-length album, YEN (on both Fat Beats & Left of Center Records). A devoted student of the art-forms of past luminaries such as J-Dilla, Chapman has been diligently pushing along this burgeoning music career of his that has already taken him into collaborative engagements with notable producers like DJ Soko, local greats like Guilty Simpson and Red Pill, and even a chance to meet with A&R reps at Warner Music. His first album, F**k The Hype, came out to considerable acclaim locally and nationally in 2015, marked by a lyricism that had ferocity, but also came straight from the heart.

Chapman spoke about his development, his new album, and the importance of being a studious hip-hop artist that focused on the fundamentals.

Anyone listening to your music for the first time will pick up on one thing immediately: intensity. Tell us about that, and about your formative moments when it comes to music, hip-hop and lyricism.
I always felt connected to songs that made me feel a certain way, ya know? Some of my favorite hip-hop joints have so much energy! Even if it’s just being played through an (auxiliary input cable) and performed, it’s still live! I just want to present an experience when people check out my music. From the lyrics to the beats, to the artwork, and everything; it’s an overall package that’s seeking to leave an impression on you. Make you say: ‘Yo! This s**t is crazy!’ I’d have to say that, for me, it all started with my cousin; I remember him having tons of hip-hop posters in his room, like Redman, Lil’ Kim. My mother also had 2Pac’s ‘All Eyez On Me.’ I used to sneak and listen to it on the Walkman that she had, (laughs). That was the root of it all! As I got older, I just developed a real love for hip-hop. I’d watch YouTube & download lots of stuff on Limewire. I was just hungry for the art. At some point in time, I decided to start making my own music. I was 14 when I made my first demo.

I used the word intense. But others might also say aggressive, even confrontational. Talk about what’s unique about the way you approach your music and performance, and what you hope an audience takes away from it
Well, it’s unique because of the angle that I’m coming with. My sound is real traditional and gritty. And I’ve made my bed with that direction, which I’ve accepted in full. But, again, I just love hip-hop. I knew that I would grow up and do something in the field because it was just instilled in me! I’ve studied this art-form as if I were going to school for it (laughs). But, my main objective is to inspire others. That’s what it’s all about. The way I get inspired by a DJ Premier or a J-Dilla beat, I want to leave that same effect on a listener of my music. It’s a community, ya know? I just want to continue pushing the tradition and taking it as far as I can. I’m only 25, so I’m fairly young; there’s lots of room to grow, yet. My good friend, and engineer, Nysa, are always at Assemble Sound coming up with ideas (for production). But being on stage, that’s the best. Because, again, it’s an experience. It’s cool to see the idea of the music come to life when you were just at home or in the studio brainstorming it. That feeling is somewhat surreal.

Tell us about the new album, YEN. What distinguishes this album, in terms of message, theme, vibe, to the first recordings which came with such a bit of bellicosity and bombast.
Ah, yes! YEN! Man, this album is great; I’ve played it for a few people and they all said it was my most ‘colorful album.’ And, it probably is. I really took my time with this new LP. I wanted to curate the quintessential album for my people around the way. (On YEN), I speak on my upbringing and how it’s affected my aspect of ‘the yearn…’ And, what’s the Yearn? Well, you have to listen to the album to figure that out! (laughs). Plus, my first album, He(art) is going on three years old, almost. It came out in summer of ’16, but it was done in early ’15. I was just hungry! I just wanted to show people that I could rhyme! And I was 22-23 then, just coming out the gate with an LP featuring Guilty (Simpson), Phat Kat, and all of these other great emcees; that was unheard of for a guy my age! I feel like that debut LP may be in one of those conversations, 10-15 years from now, about the ‘best underground hip-hop debuts…’ A lot of people showed love towards it, and I’m forever grateful for it! I believe (YEN) will put things in a better perspective, as far as who I am as an overall artist, instead of just an emcee who makes beats, ya know?

Talk about the production side of things. Cuz you also put out an album of instrumental arrangements. What inspires you when it comes to the lyrical side, and the instrumental side?
I gain inspiration from a lot of things, films, television. I definitely read whenever I get the chance; I love motivational books, pieces that’ll help my drive stay alive, ya know? My mother is a teacher, so all of the stuff that she disciplined me with, growing up, I apply that to my music. Never wanna slack on your fundamentals; it’s vital. But yeah, I love producing! It’s like I’m a different person when I’m making (instrumental) music. Of course I love rhyming! That’s how I got started, so that’s my first love. But I do enjoy playing records, flipping them, and just making beats. I literally wake up and get to work (on music) every day, it’s all I do. I got mad records, so I’m always finding something new that I’ve never touched. I also love to flip some of my favorite classics, which is how (the instrumental album) lo-fi flips came about. I’d like to take my production to another level though; I want to shift to the R&B side a little bit more. And, ya know, bring that hip-hop element into play. I want to collaborate with Christina Aguilera or Jill Scott someday: their voices would sound dope over some gritty vibes!

Give us your take on ’s hip-hop scene over the last several years. Where do you think it’s going? And where do you, yourself, wanna go (or try) next?
I got love and respect for anyone in the city doing their thing. And the end of the day, we’re all just trying to be better individuals with better opportunities to give back to our families and our communities. That’s the common goal, I feel; that we’re all in that same boat. Regardless of accolades or whatever, we’re all just striving to better our lives and surroundings. I feel like we’ll show more promise as a city once we all start to realize that. That’ll help strengthen us as a unite for sure. But meanwhile, for me, YEN is the second LP for me and it’s dropping in September (Left of Center / Fat Beats Records). I’m in the middle of setting up a little tour as well, so I’m gonna be quite busy these next few months. I’m ready for everything, though! It’s gonna be interesting!

https://www.facebook.com/pg/nolantheninja
Posted by jeff milo at 5:00 AM