Twin Peaks: "It may be the key to what this is all about"

I woke up surprisingly nightmare-free after Part 8 of Twin Peaks: The Return. 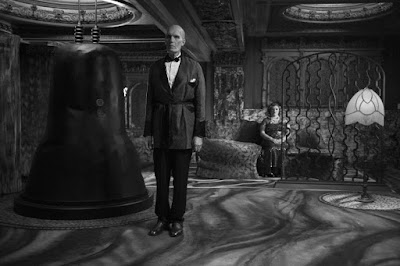 I'm a little taken aback; almost afraid, in this weird way, to admit that this might be what I've always wanted from David Lynch. To "return" to the essence of Eraserhead-grade hallucinatory sequences, where nothing was spelled out for you, if only because the tangibility of reality, and thereby, your own language to describe what your seeing, falls away.

Part 8, "Gotta Light," was an hour-long episode with about 13 minutes of perceivable plot and dialogue. The rest was your own trip. I mean, it was David Lynch's trip, you and I were just stowaways. At this point, certainly, anyone "returning" to Twin Peaks with pedestrian nostalgia for the first two seasons is now realizing that they just got back in line for what they thought was another trip down a fun, safe plastic water-slide and instead were nailed into a barrel and bobbed down the tides towards a beastly, rocky waterfall of seemingly infinite elevation. 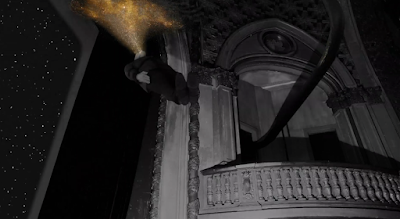 Does David Lynch want to show us the coinciding origin stories of both the Black Lodge and Twin Peaks? It's all up to his own whims, at this point, so he will fill in whatever blanks that HE feels like filling in - but he's going to do so in his own language.

That language includes:.... whirling through the virulent caverns of an atom bomb in perpetual/frozen detonation; .....visions of a convenient store (referenced in the first two seasons) that could tie into the ramblings of "Mike" about our most famous inhabitants of the Black Lodge; .....another glide across the dreamy purple ocean towards a Neptunian/Guggenheim-ish castle on a rocky cliff (is this the White Lodge???) ....where an alarm from a disturbing obelisk quietly notifies the character we recognize as "The Giant," to go survey an instant replay of said-A-Bomb (set off in 1945) on a haunting canvas screen inside an empty, ornate theatre where you can just about taste the space-dust off the walls....

And....then we go to..., and I don't want to get too deeply into this, but...., the possibility of some kind of seed, a golden sphere containing the image of Laura Palmer, being shot down toward the North American continent from space... From there, jumping ahead to 1956, we have frog-legged scarab beetles scurrying towards an eventual cringe-worthy entry into the mouth of a tranced-out/sleeping little girl, and a bunch of burnt-faced Woodsmen scurrying across the desertscapes of Mexico, one of them eventually taking to the airwaves and reciting, at least 10 times, the spookiest stanza I've heard in recent memory....

Someone once wrote that Eraserhead is only 89 minutes long, and that that's as many different meanings or symbols one could potentially decipher from its feverish, living-painting-like drifts.

I'll just say this... What I found to be one of the most interesting and disturbing features of this episode was the sequence of these molten ghost men, hundreds of them, or just 10 of them doing fitful circles, sped up to blurring speeds as they came and went, entered and exited, stood, scurried, and returned, to the front of this gas station. David Lynch has always had a proclivity for stillness. Quiet scenes that linger, characters that just stare off into nothing or stare down the camera... Dialogue spread apart. Scenes drawn out. Slowly. This episode had moments of the slow and the quiet, but when these men, these creatures, these apparent ancestors or first inhabitants of the Black Lodge, came on screen for their three big scenes, it was their suddenness that frightened me most...

And frightened is too strong a word. Frightened doesn't describe the predominant emotion resonating after last night's episode. But it feels close, doesn't it? The kind of perplexing fright you feel after a nightmare.

What I'll leave you with...
The Woodsman is intent on repeating: "Gotta light?" Laura Palmer's face is in an orb of light. And then there's this.... 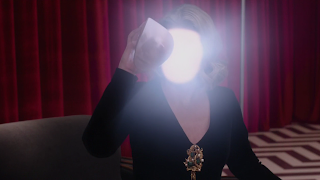