Fred Thomas just put up remastered versions of his solo songs from the last decade. There's plenty to listen to, but I'm musing on particular album, here...... 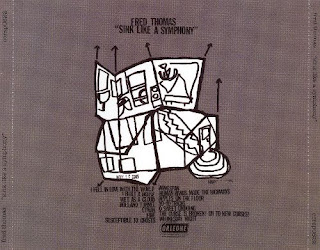 The tangibility of music, music as an experience, something that attains preciousness because it is, in fact, palpable..., is something you'll hear romanticized by the vinyl collectors. But yesterday, Fred Thomas posted all of his at-once-hard-to-find solo albums from the early/mid-2000's onto his bandcamp and it slid me down a nostalgia rabbit hole to the days, yes the college days, when I would be burning two (or maybe three) CD-Rs per week, jam packed with only 19 songs and 74 minutes of music, carefully sequenced, of course, to achieve an uncanny harmony between disparate artists.

Making a mix CD for someone else or even for myself was more fulfilling than anything I could think of at the time..., I mean some people like buying new wardrobes, or working out, or going to get a new haircut, or hiking, or baking... I just wanted to take songs, smash them together, and sort of give me an excuse to put something fresh in my discman (yes, discman) and then go for a walk with headphones to just get lost for a couple hours.

Sure, CDs are impersonal, and to millennial eyes--probably silly, and they aren't as majestic as those vinyl artifacts, but they were still utilitarian sonic canteens into which you could fill up a travel-size amount of music... And I say that knowing full-well that I typically spend a couple hours streaming music from online services across various wi-fi's today, but I have to go back to the same old refrain of that excitement-of-accessibility often feeling hollow... like having Google Maps just show you the quickest route to the (formerly)-Lost City of Gold. Everyone's been to that Lost City now, because streaming takes away the seeking...

There is a strange thankfulness that I can't quite place, in having found an album like Sink Like A Symphony, or in having found the solo works of Fred Thomas, in general, in 2006, at a point when I was fragile or self-conscious or full of smaller, simpler wonders.... at a point when I was certain I wasn't cool and even found a lot of solace in the faith of that fact.

Wondered about how one room feels empty
And one feels loud with the wonder
Of how we had all lived in closets
In backyard lightning
Then lived alone with many disguises
Nobody seed you or me as the same person twice.
----"I Built A House"

At that point in my youth, I still knew that this would be something worth checking out because it was "the guy from Saturday Looks Good To Me..."
I can't remember whether I found this CD at Encore in Ann Arbor or Flat Black and Circular in Lansing; I just remember the proceeding months where I kept re-placing it into my trusty discman, for campus strolls.

There is always something about this record and lots of Thomas' songs that feel like impossibly-found secrets slid into the cracks between the bricks of an abandoned home down a country road that the louder city forgot... Some note you found in a shoebox on the top shelf of your closet that's crinkled and full of poetry. Even listening to these songs the first time, they felt, in some supernatural way, like something I'd heard before....

And I know I'm going off the cliff here with emotions and flowery nostalgia..., but it's because I feel like he has this way of singing that is endearing in the sense that it feels like you can sense subtle strains of anxiety, or introversion, or a bluntness one reserves for diaries, there is a gutpunch kind of evocation where his voice quavers with this faint, but just barely perceptible, shiver of hesitant-ness, where the chorus is his stomping down over the fear that kept him from saying such a powerful, or vulnerable, or romantic, or ugly, or sweet, or abstract, or sincere thing.... You might not be able to put into words the angst you're feeling as a 22-year-old, Jeff.... But Sink Like A Symphony could... And I wouldn't have spun it the whole way through if it wasn't on a CD that I found....

Even if CDs are dead now... They are, right? Fred Thomas' music is alive...right here.