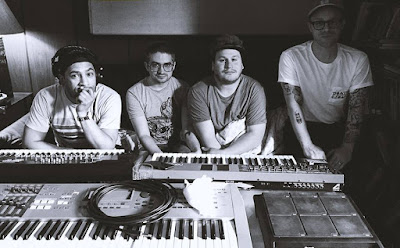 Thunderbirds Are Now weren't done yet... I mean, the band was in kind of an indefinite hiatus for a while, but the inclination to return, given the right circumstances, was always there... For all intents and purposes, their activity receded into dormancy in 2008, and there hasn't been a new recording released by the Detroit art-punk outfit in 10 years.

Ryan and Scott Allen, Julian Wettlin and Matt Rickle got back into the studio earlier this year to finish up two songs that were written right before their run came to an end.

Thunderbirds Are Now! were almost swept up entirely by this wave, back in 2004/2005, of Pitchfork-exalted, hipster-approved spaz-punk/indie-rock upstarts (like Les Savy Fav or Hot Hot Heat). Their French Kiss-label album Justamustache was praised as one of the best albums of the year -in the indie-rock circles of the internet. Whereas Make History still got good reviews from the shrewd and sometimes snobby scribes at Pitchfork, the band still felt that their last album was a bit too rushed... That it could have been better.

So there was this feeling of unfinished business... Granted, they've already done the "reunited" thing for a special one-off show. But they didn't get back into the studio until..., well, until it felt right. And that came after the horrendous and disenchanting 2016 Presidential Election.

TAN singer/guitarist Ryan Allen has been on a bit of a songwriting kick these last 5 months, spurred by an essential-rejuvenation following his decision to go sober. "And a lot of the music I was writing recently was influenced by my observations of what's been going on. I expect a lot of artists' new musical output is going to be, and will be..."

These songs were reworked (and the lyrics were rewritten) to transpose their defiant/valiant/fight-back sentiments upon our current times. The idea was not so much to give a treat to their sustaining fans, but to use the songs, and the gesture of donating download proceeds to ACLU, as a chance to start a conversation about how everyone who's feeling understandably irksome, idealistic, or upset, needs to be taking any kind of action.

"I felt, back then, that the lyrical content was addressing personal politics. But, now, I feel that's all mixed into our greater political climate. I actually didn't go to any protests when George W. Bush was president, but I'm way more plugged in now. Which, I guess, is one good thing about this presidency; it's made me more aware of what's going on in the world."

As time will do, it matures most musicians. The members of TAN are no longer reckless and rambunctious early-20-somethings sleeping in vans and drinking PBR before transforming into amplified human pogo-cartwheelers wielding guitars. The four of them have, just like all of us, started taking stock... And that's what these two new singles are all about.

"Being the age I'm at, and having a kid...those types of things concern you more, not so much by how it effects you, personally, but how it effects the next wave of future adults. I hope to God that in 12 years, when (son, Emitt) can vote, that this isn't going to be something that has to be considered. Like: Do I vote for the racist guy...or the lady that everyone thinks is a liar? Hopefully we can move in a better direction. I'm all about opposing opinions, but, this last go round was something I've never experienced before in my life."

Most importantly, we need to change the perspective of punk rock music necessitating a villain in order for it to flourish...

"That whole notion of: Now..., punk's gonna get good again? Because we have someone to rally against? I don't subscribe to that. Sure, it would be fucking awesome if Fugazi released a record in reaction to this terrible situation, but the political climate doesn't have to be terrible for punk music to be good."

Ultimately, said Ryan, it's about being more plugged in than ever before. And thinking more broadly. Broadminded, contemplative, compassionate punk... That's a veritable wave of the future that I'll happily embrace.