Over the last year, musician Jeff Yateman has been writing/producing songs for the debut album of his alter-ego, Jemmi Hazeman. Yateman was one-third of the founding membership for post-rock/indie-pop trio Shady Groves, but parted ways amicably back in August of 2016. Before that, local showgoers would have seen him in The Kodaks.

But Jemmi Hazeman's singular voice and aesthetic will be on display with Kozmic Mhaze, which is planned to be released in the early autumn.

This 9-song solo album of synth/guitar-centric space-rock rides along mellowly-danceable rhythms that vary from the more uptempo, to sometimes being a little more detached or atmospheric, but always coiled with catchy choruses from Hazeman's vocals, the intonations of which fuse nicely onto the cooler glides of electro-ish indie-pop arrangements.

The visuals, and keen split-screen editing by Elaine Smith, are dazzling; particularly the spilled/splash of warm-yet-cold colors like soft purples fusing into reddish magentas.... 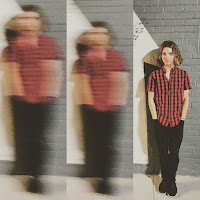 "I've always essentially been a solo songwriter," Yateman said. "Even when I wrote songs for Shady Groves or the Kodaks, I basically recorded and wrote all the music myself." On Kozmic Mhaze, Yateman played guitar, bass, drums, keys, sang vocals and produced, mixed and mastered everything.


The precursor to Jemmi Hazeman was a solo project he had called Animate Daze, through which he released music but never played a show. "I decided to switch over to Jemmi Hazeman because I wanted a fresh start, in terms of releasing music. Jemmi Hazeman is just an amalgamation of my actual name, with Jimi Hendrix. Kinda came about while being high & jamming with a friend..."

Part of the fresh start includes a full five-piece band for live shows (two guitars, bass, drums & keys). Yateman said he'd played a few shows just with backing tracks for drums, with synths, but it just wasn't as fulfilling. SO.... Stay tuned for more from Jemmi Hazeman, including another new video for the song "Reality Ain't A Friend."