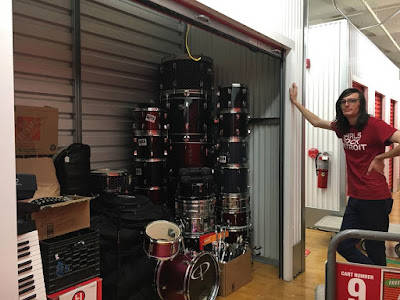 The Girls Rock team is opening up their considerable collection of gear (instruments, amps, mics, etc) and they'll be looking for volunteers to help, lift, tally, and possibly repair this gear, so that everything is ready for the incoming Summer Camp students.
INFO


Girls Rock Detroit was founded in September of 2014 by Melissa Coppola, Rosalind Hartigan and Willa Rae Adamo. We are an LGBTQ friendly organization and strive to provide a safe, visible atmosphere for all. Girls Rock Detroit is a community organization dedicated to fostering girls' creative expression, positive self-esteem, and community awareness through rock music education and performance.


Over the weekend, I caught up with Melissa Coppola, who not only helps run Girls Rock Detroit, but also writes/records & performs as the drummer/singer of Ypsi-based post-garage/indie-pop duo JUNGLEFOWL, with her husband, guitarist Stefan Carr.

Thursday's are typically the days where I premiere a new single from a local band. JUNGLEFOWL let this one out on the internet about a month ago, but if you haven't heard it yet, check it out...


"We're looking at about 40 to 45 campers this year," Coppola said, "that's the most we've ever had! The showcase is going to be amazing; I can't explain how excited I am that it's going to be in the Majestic Theatre! The 8-year-olds I work with are going to make their debut on that stage!"

Coppola is the executive director of Girls Rock Detroit. Several years ago, she first volunteered for the Chicago chapter of this nationwide nonprofit alliance, where she met Detroit singer/songwriter Willa Rae (of Willa Rae & The Minor Arcana), and soon after met musician Rosalind Hartigan.

When she's not in JUNGLEFOWL, or Girls Rock Detroit, she's working on piano pedagogy (educating) with the University of Michigan School of Music. Stefan Carr, meanwhile, has 5+ years experience in music education, formerly serving as director at the School of Rock School in Farmington.

Coppola allows that certainly not every girl taught through Girls Rock are going on to be a member of the next amazing blow-up/buzz band..., but that what matters most of all is "the unifying factor at these camps; it brings people together and is a way to get girls together in a way that is not competitive, and lift each other up. It builds a community in which people are encouraging each other instead of tearing any one down."

Coppola said that the encouraging and welcoming factors of Girls Rock Detroit are what's most important. "Because," she said, "even now, it is still a made-dominated (music) industry, and when you see women playing, I still see folks being very critical... But Girls Rock is fostering a new generation of musicians that will think otherwise."

Carr agreed, saying that his role in music education enterprises like Girls Rock (or School of Rock) is fulfilling on a level that exceeds just performing, because through teaching the next generation of potential members of rock-bands, it's a deeper, more evident contribution toward pushing the music scene forward.

"The showcase is where the magic happens," Coppola said, looking forward to August 5th's big revue at the Majestic Theatre. "At every band's performance--I cry! There's a visible fusing of self-confidence that you can see in every performance. As soon as you start playing, all the nerves can go away and you start smiling and feeling confident and you see people nodding their heads in enjoyment and (the students) realize that the music they make is an opportunity to make other people happy with what makes them happy!"