Imaginatron: It's a Very Nice Cult

Regularity is overrated. Discomfort can be good. Cults can be nice.

Today I'm talking about The Imaginatron, and I'm not sure how to explain it to you. They have a new EP they're putting together, which will record fleetingly-finalized versions of songs that have, to this point, never sounded the same way (or been sung the same way) twice, ever.

The picture you're looking at up there is, ostensibly, of a band. That band features Steve Pivalsky on vocals and conjurings, Nik Landstrom on guitar, and Dan Patterson on drums. There's also a song "by" the Imaginatron, streaming below, which will give a taste of what's to come on their forthcoming EP, which the "band" just finished recording. This song, "Uninterpretive Dance," demonstrates their proclivities toward avant-gardist rock sails upon a sea of staticy-electronic synth drones and hyper-danceable rhythms, with post-punk-poetic vocals that sing-speak strange incantations. 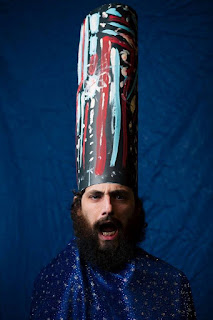 You see..., "The Imaginatron" is sort of a parallel (or maybe perpendicular?) universe that can be attained both mentally and physically, and essentially utilized as a cosmic instrument to achieve a collective metaphysical harmony with not just the people in a room, but with energies across the globe, or even some other celestial netherfield...

Imaginatron is just what this band happens to be called, but they're named after the Imaginatron, said Pivalsky. "It's meant to point toward the entity that is the thing, that magical thing of perceivable nodes of energy that pulse ideas into our minds from other realities. It's the magical instrument that we play when we move around spaces outside of our comfort zones."

I talked to someone, recently, who recalled seeing The Imaginatron (the band) for the first time. When I told him that it's sort of, a bit, like a cult meeting..., he suddenly got it! Like he couldn't put a finger on it until I suggested the idea of a cult.

"Yeah, but it's a chill cult," Pivalsky clarifies. "I'm not crazy. It's a very nice cult. And there's no limitations or rules for you, in this cult!"

Back to no song, or no set, ever being the same...
These three are students of the ephemeral, of transitory moments, of consistently-refreshing with something that was weirder than what came before...
Their ceremonies find Patterson propelling everything, while Landstrom noodles out jazzy freakstorm lightning bolts on guitar. And finally, Pivalsky is a performer you'd rightfully describe as being "unleashed," when you observe him; some kind of high-adrenaline spirit freed to explore the entirety of a space. There is lots of symbology, and small crafts and structures, or vein-like strings and esoteric pamphlets all spilling about as Pivalsky continues to cavort his way into the crowd to accost and invite and inculcate and indoctrinate.

The Imaginatron gets you out of your comfort zone.

"It's not about being comfortable or discomforted; it's about challenging the boundaries of your comfort," said Pivalsky, who's singing style is often breathless, stratospheric ecstasy taking him into a trance. He might hug you. He might not even remember having hugged you. But he's probably going to come right up to you. There's lots of movement. There's lots of seemingly random movement, in fact. Something takes over. The Imaginatron takes over.

"It's about cognitive dissonance too," said Pivalsky, suggesting the benefits of an occasional detachments like this... "I feel like everyone wants to do that sometimes, but just doesn't know what the outlet for it could be. But I know I sign in kind of a punk rock intensity, but it isn't something that's crazy or aggressive. I don't have feelings of aggression. I do want to scream, but I want to hug you while I'm screaming..."

So it's all about channeling that energy. Pivalsky isn't a cult-leader, even if that beard and that boisterous, wild-eyed expression might suggest it... His band mates aren't being guided by him, is what I'm getting at--they're very much on their own trip, displaying, musically, their own relationship to & experience of: the Imaginatron.

It's a prime time to catch The Imaginatron. The "band" is as mystically attuned as ever; Pivalsky is back into the arts scene, after some time away between this band and his previous trip: Marco Polio & The New Vaccines. And, The Imaginatron are, as we said, finishing up recordings right now. And after that? The sound, the style, the energy-- could shift all over again.

I couldn't have put it better.

Thursday nightFeaturing the retro-techno trips of Lt. Bad, and the acid-spazz incantations of The Imaginatron
at PJ's Lager HouseJoining the party are Richard Album and Katy Albert:
Richard Album is a pop-star persona from Chicago premiering a funky musical about fame and misfortune. And Katy Albert makes performance-art that can be both funny and grotesque. She uses humor and audience interaction to lampoon artsy-fartsy power structures.