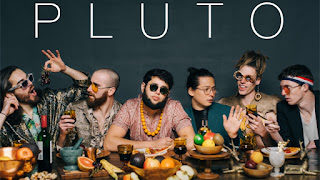 I interviewed Joe Hertler (of The Rainbow Seekers) earlier this year, and I remember the conversation being dominated by how much more of a darker album they'd just produced. That was Pluto, and Hertler deemed it his most personal and even vulnerable batch of songs he'd ever written.

Whereas in the past, the band has been a burst of warmed and colorful burnishings set to bouyant rhythms, effervescent guitars and vibrant melodies, they turned the song creation process into a much more collaborative, careful cultivation that yielded more complex or eclectic arrangements and dimmed the sunshine from their previous records for something a bit more outwardly pensive or sometimes solemn. But a certain sweetness, a hopefulness, always sustains with The Rainbow Seekers' songs... Still..., the melodies may get light, but the subject matter is getting heavier.

This song, "Old Love," is based on an old Japanese folktale about two Samurai from opposing factions who fall in love. When they meet after a horrendous battle, they come to see the futility of war and set aside their differences... "is there really so much to fear / when we’re all just taking sides?"

This video was directed by Paul Zito, who created more than 10,000 unique paper cut outs for this animation, which spanned four months worth of production.