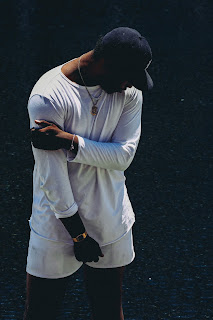 So about three years ago, I was turned on to a band called Maraj. It was an ensemble blending hip-hop, jazz and soul, and they were essentially based west of Detroit, out towards Kalamazoo. So I was stoked when they were going to appear at a Merrick'N'Trumble festival in Woodbridge a couple summers ago... Turns out the band couldn't make it. Just a couple artists were up on the stage during their set, a DJ and a lyricist. That lyricist was cool, confident; he shined. He was MotorKam and I walked away a fan. I spent the next couple hours just trying to process it...

And I've been listening to his new EP BlackDaddy Birthday Suite about five or six times in a row trying to grasp the carousel bars gyroscoping in intricate patterns over kinetic rhythms of tightly snapping bass booms and aerobic percussive arrangements.


There's so much character to his inflection, splashes of flamboyancy, curtains of cool R&B crooning, deep-into-the-groove staccatos of wordless incantation, and a plethora of robotic/alien reverb wrapped vocals and pitch-shifted double-track call and response.

These tracks make it impossible to resist movement. Right? I mean, your shoulders just loosen and start to sway, and knees get noodly as you start rollicking back and forth. Much kudos to the production of DJ Deada$$, Marshall Law, Landman Dxn, and DJ Jalen. But there's especially so much energy in MotorKam's voice. "I'm a wild boy, that's my lasso..." he sings on the smoothly hyperactive "Judo Chop," which kicks off this EP with spastic jazz pianos cascading over 80's synths and trunk rattling bass. "TigerSexy Freestyle" is also demonstrative of how he's playful and fierce at the same time, wildly ranging the register of his voice even as he accelerates his cadence, all the while augmented by these beatmaker's freshly eclectic blends of speedy sci-fi funk.

I don't know what it is about "SLC" that makes it my favorite; it might be that indelible beat, or it might be the dreamily distorted chorus of voices harmonizing through the chorus, or it just might be the certain timbre to those haunting synths with their curly hooks. But, again, it's probably his vocals. MotorKam transcends typical tropes with his keen sensibility for using his voice almost as if it were a biological synthesizer, stretching his vocal notes out for four measures or blurring it into a buzzy hum, but then tightly packing the next few bars with mighty high word-count carefully articulated to the consistently fleet spill of beats.

I'm already listening to this for the seventh consecutive spin. Trying to sit still in my chair as I type this... failing.

MotorKam, aka Black Daddy is performing at this year's Dally In The Alley
Sat., Sept 9
Forest Stage
5:30pm
More info
Posted by jeff milo at 2:20 PM