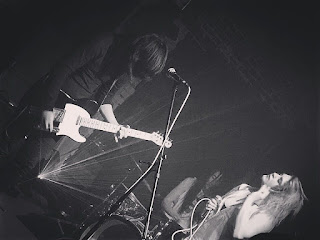 TART's evolved quite a bit over the last three years. Cliched as it sounds to say this, but Toothache is really the proper debut moment for TART, (after a couple EP's they put out earlier). TART started out as a duo, with singer Zee Bricker and guitarist Adam Padden, but has thrived in more aggressive rock terrains as a trio, with drummer Don Blum.

The immediate/sustained energy of this EP essentially shoots up to a confrontational standing position and promptly throws the chair through a window. Whereas their developmental phase indulged electro-pop or dance-rock, something like early Rapture melded with Yeah Yeah Yeah's, the engines are revved into another gear with Blum that gives them so much more grit, evident in the fiery bridge of "Miss Me," where Bricker's voice becomes a melodic growl and Padden's guitar claws into a noisily distorted solo.

You can even hear it in the first five seconds of this song, a foreboding thrum of feedback just roils for a bit, just enough to get your shoulders arched with expectation, until that kickdrum thu-thumps in under a hard-hooking guitar. Sometimes you can picture a singer in your head just by hearing her voice, energy, power, attitude... "Young men are always listless..." You can see Bricker just glaring down at you with that cutting dismissal. "You're timing's wrong..." she winds out her intonations with this intensity that seems to suggest that even she's aware of how her guitarist and drummer are about to click the roller coaster over another peak on the track for a few  more wicked loopdeloops.

Padden's guitar, on previous songs, sounded sleek, cool, jet-like... Now, it's murkier, it's meaner, it's just more realized; a turbine crackling with so much  more low end to it that suggests sufficient muscle for a mosh-pit...This is particularly evident on "Toothache," where Blum's performance seems to envelop the song as it progresses, hitting those toms with a building tidal wave as the song crashes in, and eventually spiraling across the whole kit for some of the most dynamic fills I've heard in a long while...dude's a pro. And, yes, he was a missing piece of a rock-formula for TART, but it also helped that Bricker and Padden already had surplus chemistry between the two of them already built up before his arrival; that he fit right in and spun along immediately speaks to his versatility.

Whereas the first two songs I've mentioned definitely take TART into the darker, more atmospheric rock, and almost kind of an indie-metal trip of acts like Savages, there is a lighter, brighter pop slider of a song in "Metal Eyes" that brings the catchiest hooks and earworm la-la-laaah melodies. But then my favorite song of this batch, "Dive Bar," comes in and kinda combines everything that's working so well with the new iteration of TART: Somewhere between a more frenetic art-goth punk and a steelier, kinetic hard rock anthem.

This EP is out Friday, with a release party at Ghost Light in Hamtramck, featuring Double Winter, and DJ Marcie Bolen.
MORE INFO
Posted by jeff milo at 6:28 AM