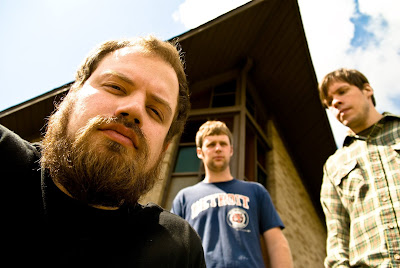 Copper Thieves are releasing a new album this month. And even though it's been almost 8 years since their most recent release, it sounds like they haven't missed a beat, picking up right where they left off with their blend of gritty 90's lo-fi rock and whiz-bang power-pop hooks! And they're going big with this one, having already edited together some old footage and posted a batch of music videos for all 10 songs on 333 & 1/3.


Christian Doble and John Nelson are on guitars & vocals, with Andy Roy on drums. The trio of longtime friends had each already substantially cut their teeth in the rock scene with previous bands like New Grenada, Kiddo, FAWNN, Destroy This Place, and a few others.

You know how you can win a game of H-O-R-S-E when you're just relaxed? Sinking three pointers with clarity, calm, and focus? Part of why Copper Thieves can make this instantaneously catchy composite of skatery-surfy riff-rock (something like the best strands of Superchucnk, GBV, Ted Leo & Weezer all woven into one new dynamic DNA), is that there's a comfortable chemistry uncommon to most bands. These guys have known each other for so long, but they've also been playing music together, honing that unspoken harmony of performance and ideation desired by any band.

And thus, Copper Thieves are untethered from the pressures of branding one sound or pushing one style or fusing to one specific aesthetic. The checklist includes: Guitars. Harmonies. Propulsive drums. Melodies threading through the distortion. Earnest lyrics. energy. Not that it's all as simple as that... But there is a definite relatability to a track like "Deserve It...," with its breezy cascade of riffs and that strutting beat..., like it's a close friend just shuffling up to you in the crowd, rather than an overly-festooned hipster science project designed to overwhelm you with chic audacity.