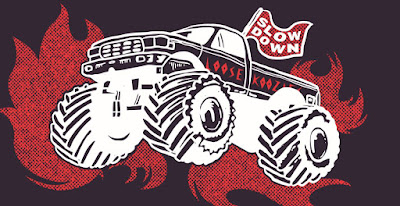 As you can see, the flag implores you to "slow down..." and yet it's flown from the bed of a barreling monster truck that appears to already have hit reckless velocities. It reminds me of the first single that Detroit based quartet Loose Koozies released more than a year ago: "Rollin' Heavy..." Whereas that title might suggest some kind of aggro-riff on Cream, Grand Funk or Foghat, yet their song is a sweet, shuffling strummer of a melodic country-folk ode, stitched with sentimentality and world-wary wisdom. And while there are plenty of lyrical ballads about small towns and plaintive blue collar pleasures woven into disarming metaphors and erudite wordplay, you might be surprised to vibe nostalgically with a rockin' story about a horse track in Hazel Park where you can, if you're hungry enough, have up to five hot dogs. Yes. Loose Koozies kick your preconceptions to the curb in a lot of ways.

Pete Ballard's pedal-steel is prominent on these two new tracks, recorded in Detroit with Warren Defever of His Name Is Alive; but the heart of Koozies charm is the rollicking rhythms of Nick German (drums) and Erin Davis (bass), finding the a propelling pocket for the energizing "Slow Down Time," and the easygoing sway and melodic hook for "Marita." Singer/guitarist E.M. Allen's mid-high rusty warble promenades over those rhythms at matching tempos hitting registers that you could almost qualify for honky-tonk status but you're too busy dialing in to his capricious dispositions with lyrics about lying around in your underwear hiding in the verses of a song that's got some sincere thoughts to share about the simple paths to happiness. Guaranteed in every Koozie song is the decorous fret dressings of lead guitarist Andrew Moran, weaving around each lyric, bass groove or cymbal hats and sure to bring out an elegantly face-melting solo in the bridge to each closing chorus. 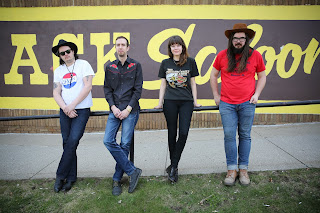 Each Koozie brings something fresh to the table--with resumes that include bands more inclined toward indie-rock, punk, or something even further from "country." What manifests here is something organic, some other kind of "country..." ... a laid back yet luminous arrangement of road-trippable worry-killing ditties that just so happens to have a bit of twang and strut to 'em