"Song of Victory" from D-Imports Vol. 2 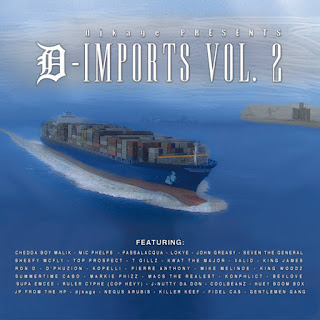 Many have been asking me: Hey, Milo...what are you looking forward to in 2016?

While that could be a long list, I'm thinking the top spot will go to djkage's D-Imports Vol. 2. We can throw around superlatives like "greatest" or "ultimate" or even "definitive..." But, really, when you're looking to curate a compilation, why not try to arrange as many of the most talented artists you possibly can find... 33 artists, 25 tracks, ranging from leftfield hip-hop, to post-trap, to soulful indie-hop, boom-bap and even shades of techno.

What's evident, so far, is that the ensemble of individual MCs working with djkage fittingly charged up for the occasion...

But we're here to let your ears in on another exclusive premier from D-Imports Vol. 2

"Song of Victory" features Valid, Ron D, Negus Arubis & Mic Phelps. It's a slow-stomping, propulsive track with fiery delivery, blasted with brass and scorching forth with that chest-thumping beat. "Song of Victory" feels triumphant and celebratory, but also declarative; an inventive blend of funk, big-band jazz, reggae and world music, with Mic Phelps taking it into high gear just pass the bridge.

D-Imports will be officially released on January 28, 2016.